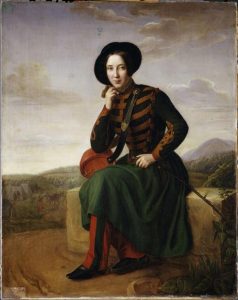 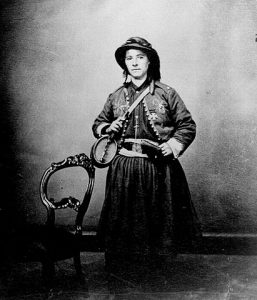 If you’ve spent any time here on the Margins in recent years, you know I’ve been thinking about women warriors. One thing I’ve learned in the process is that women have always been a part of war, whether or not they picked up a weapon or led a charge.

From the sixteenth through the mid-nineteenth centuries, women were always a critical part of European armies, though not as soldiers. They cooked, did laundry and mending, nursed the wounded, and scavenged the battlefield for useful gear when the fighting was over. The British army described them as “women on the ration”—such women may have accounted for as much as ten percent of the British force in the American Revolution. The numbers varied by the type of unit: artillery units, for instance, which as we have seen needed support on the battlefield, tended to have larger numbers of women than other units. Such women were often the wives, or at least permanent female companions, of enlisted men.(1) Some armies also tolerated women “off the rations”—prostitutes, grog vendors, fences for plundered goods— as long as they did not disturb camp discipline. But that’s a different story.

Vivandières were a last-gasp variation of “women on the ration”. They first appeared in the French army shortly before the Napoleonic wars, after efforts to outlaw the presence of women in army camps. They continued as official auxiliaries of the French army until 1906.(2) A small number of women also filled this role, in a less official capacity, in the American Civil War.

Like their predecessors, they were often married to a member of the regiment and they traveled with the army. They were attached to specific regiments. Although they did not wear uniforms in the sense of officially mandated apparel, they often wore unofficial uniforms loosely based on those worn by Zouave units (3)–the defining feature being a practical pair of trousers worn under a short skirt. (A uniform that Civil War nurses may have looked at with envy.) Their official job was to sell alcohol, tobacco and other comforts to soldiers–a pragmatic recognition on the part of nineteenth century armies that their own supply systems were inadequate. Unofficially, vivandières carried water, bore colors, mended clothing (for a fee) and served as nurses on the battlefield.

And, yes, sometimes they fought alongside the men they served with.

(1) Officers’ wives often accompanied armies as well. Their role was even less clearly defined.
(2) The end of the vivandières as an official auxiliary was part of the military reforms instituted in France in the aftermath of the Dreyfus Affair.
(3) The Zouaves were light infantry units in the French army that primarily served in French North Africa. They had a reputation for reckless bravery and wore distinctive uniforms modeled on those of North African troops. Units in other nineteenth century armies, most notably units on both sides of the American Civil War, adopted the colorful uniforms, presumably hoping that Zoave uniforms would come with Zoave courage attached.