Once you start looking, it seems like you find examples of women who did important things in the past everywhere. Women you’ve never heard of unless you happen to be in their field of expertise—and maybe not even then.

Take, for instance, naturalist and illustrator Maria Sibyella Merian (1647-1717). She was trained as a painter by her stepfather, who was a still-life painter. She married one of her stepfather’s apprentices. Unlike many women, she continued to paint after her marriage, producing a popular series of watercolor engravings of flowers. Her career would have been interesting enough if she had simply been a forgotten woman who made a career as an artist in the seventeenth century.

Flowers were a way to pay the bills. Her passion was insects. She was one of the first naturalists to observe live insects directly and the first to document the metamorphosis of the butterfly. (1) While still in her teens, she captured insects, raised them, dissected them, and drew them at various stages of their development. In 1679, she published the first volume of a ground-breaking work that depicted the transformation of caterpillars into moths and butterflies. Each plate showed an insect next to the type of plant it ate. Accompanying text described the stage of metamorphosis the drawing illustrated.

In 1692, after fourteen years of marriage, Merian left her husband. She spent a several years with her daughters and mother in a strict religious sect called the Labadists that practiced “primitive Christianity.” (2) When her religious fervor cooled, she moved the family to Amsterdam, where she and her daughters supported themselves as artists, giving art lessons to the daughters of wealthy merchants and selling watercolors of plants and butterflies.

In 1699, at the age of 52, Merian set off with her younger daughter, Dorothea Maria, on a scientific expedition to Surinam, then a possession of the Dutch West India Company. (3) For two years, the women collected and studied plants and insects in the South American jungle.

Merian had hoped to stay in Surinam for five years, but a tropical fever cut the trip short. Back in the Netherlands, Merian published the most important work of her career. The Metamorphosis of the Insects of Suriname, which included sixty plates illustrating the different stages of development of Surinam’s insects. The book brought her scientific recognition by her contemporaries. Sort of. Members of the scientific societies of seventeenth and eighteenth century Europe bought her books and discussed them, but did not invited her to join the all-male institutions that praised her work. 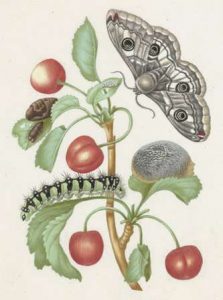 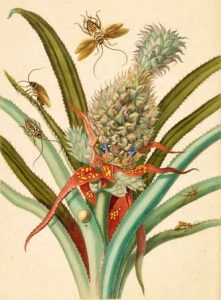 Today, Merian is once again recognized as a founder of the modern field of entomology.

(1) At the time, insects were popularly believed to spontaneously generate from the mud.
(2) Plain clothing, simple food in limited quantities, cold houses, communal property and a culture of reporting each other’s failings to the group.
(3) One of the first purely scientific expeditions to set out from Europe. Just to put this in context: Captain Cook led his first expedition to the Pacific in 1768 and the first French circumnavigation of the globe took place from 1766 to 1769, which also included a woman, albeit one disguised as a man, French botanist Jeanne Baret.