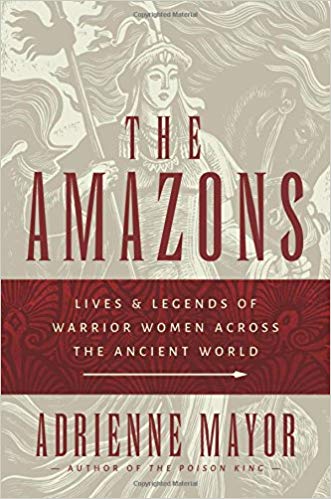 Over the last year and a bit, I’ve mentioned Adrienne’s Mayor’s The Amazons more than once here on the Margins, always with a quick note to the effect that a) it’s excellent and b) I really need to review it. (1)

In some ways a review here is superfluous. A lot of you may have already read The Amazons . When it was published in 2014, Mayor had reviews, articles, and interviews in pretty much all the places an author of serious non-fiction would like to have her book mentioned. Since then she has become the go-to expert for both the legendary Amazons and the real-life Scythian warriors who may well have been the model for Herodotus’s account. (2) Her work is even the basis for a delightful animated Ted-Ed program.

And yet, and yet, you could say that for me it’s personal. Mayor’s The Amazons was one of a handful of books that I returned to again and again as I wrote first the proposal for Women Warriors and then the book itself, not only for information about ancient Scythia and classical Greece but also as a model for thinking and writing about the bigger issues in my book.

In The Amazons: Lives and Legends of Warrior Women Across the Ancient World, historian Adrienne Mayor leads the reader on a breathtaking exploration of the women warriors of the ancient world. Working with myth, ancient historical sources, and modern archaeological finds, she draws the links between story and history, making a strong argument for the nomadic armed horsewomen of the ancient steppes as the model for the Amazons of myth. She ends the book with the quick look at ancient women warriors across the Eurasian steppes from the Caucasus, though Central Asia and into China. The Amazons is both scholarly and readable—not as easy to pull off as you might think. If you’re interested in women warriors or the ancient world, add it to your to-be-read list.

Mayor’s newest book Gods and Robots: Myths, Machines and Ancient Dreams of Technology just came out. I can hardly wait to read it.

(1) Search the archives by Adrienne for the best results.

(2) If you want to see her in action, I suggest you check out the excellent Scythian episode in Smithsonian Channel’s brief and uneven series on women warriors.