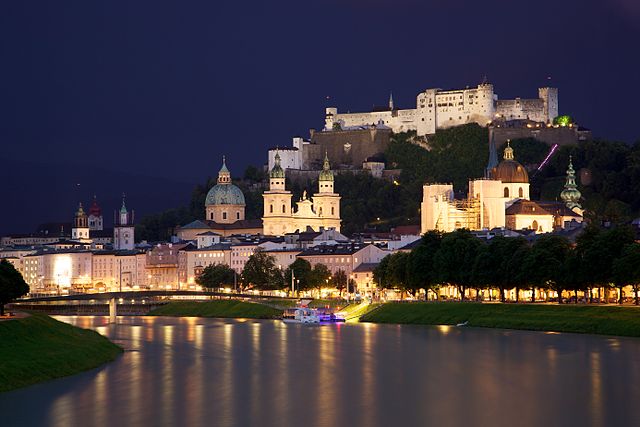 My Own True Love and I did not come to Salzburg with history on our minds.(1) We were focused on Christmas markets, the 200th anniversary of Silent Night, a little Mozart, the possibility of skiing (2), traditional Austrian cuisine,(3) and the romance of waltzing in a public square at midnight on New Year’s Eve. 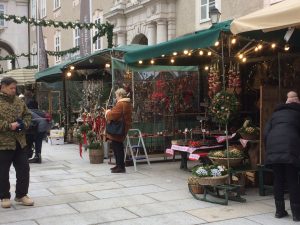 The 200th anniversary of Silent Night proved to be our downfall. On our first full day in Salzburg we stopped at the Salzburg Museum to see a special exhibit titled Silent Night 200: The History, The Message, The Present. With a little extra time before the museum closed, we poked our respective noses into rooms of the permanent exhibit and were hooked. (Though really, the Silent Night exhibit was enough to hook us all by itself.)   After all, history buggs are going to history bugg even over the holidays.

The Silent Night exhibit placed the creation of the song in the context of what was happening in Salzburg at the time. The city had been under duress for several years.  The French plundered it during the Napoleonic wars. Like much of Europe, it suffered crop failures and food shortages in 1816 (“the year without summer”). That same year, after being shuffled back and forth between Austria and Bavaria, Salzburg was annexed by the Hapsburg monarchy, losing both its autonomy and its role as a regional capital. In 1818, the city suffered a major fire. No wonder Franz Gruber and Joseph Mohr wrote so longingly for peace.

As far as I’m concerned, the song remains bigger than the historical context in which it was created. But setting the song in context made it clear to me that, while I have a pretty firm grasp on the big sweep of events that affected Salzburg, I had no real sense of how they played out at the local level. A lesson I apparently have to learn over and over again. Luckily, the rest of the Salzburg Museum was there to fill in the gaps.  We were back on the day after Christmas for an unplanned museum visit.

I won’t try to give you a comprehensive history of Salzburg. Instead, here are the bits that particularly caught my imagination:

• A small exhibit in a passageway between the Salzburg Museum and its adjunct, the Panorama Museum, shows the development of the city at four stages of its history, beginning with the Roman town of Iuvavum, founded in 15 BCE and ending with the nineteenth century. The exhibit was clearly intended to lead the visitor toward Johann Michael Sattler’s in-the-round painting of Salzburg. (4) What I took away instead was a sense of continuity over centuries.

• For most of its history, Salzburg was an episcopal state, ruled by a prince-archbishop, rather than a city. At times the land under its control was almost as large as modern Austria. It was one of the wealthiest and most powerful states in the Holy Roman Empire, thanks to salt, gold, copper, marble, timber, and rich farmland. Not surprisingly, the prince-archbishops came down on the side of the pope during the conflict between the Holy Roman Emperor and the pope known as the Investiture Controversy, a subject I spent a lot of time wrestling with last year. (5) Also not surprisingly, they were not in favor of the Reformation. In fact, in 1731-2, prince-archbishop exiled more than 20,000 Protestants from the city—almost twenty percent of its population. They fled to East Prussia, the Netherlands, and North America. Salzburg’s loss; our gain.

• The development of tourism was a conscious choice, which grew out of the the city’s connection to the international railroad system and the opening of the Salzburg train station in 1860. Developers created a Neustadt of grand hotels, spas, salons, parks and promenades to support a summer season for wealthy guests. The historic heart of the city—the largely Baroque Altstadt—became a stage for social events. The exhibit’s curator did an excellent job of depicted the conflict between historic preservation and development that was and remains an inherent part of the tourist industry.

• I was halfway through the museum before I realized I needed to look up. The museum is housed in the baroque-era residence of the prince-archbishops, known as the New Residence. (As opposed to its medieval predecessor. New is relative.) The well-designed exhibit space is modern. The ceilings are pure baroque. 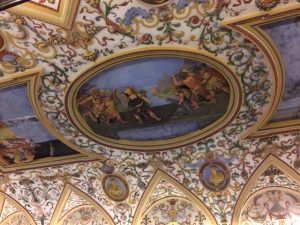 (1) Though I packed Mark Kurlansky’s Salt: A World History as my serious travel read because salt clearly played a major role in the city’s history. (As Kurlansky makes clear, this did not make Salzburg unique.)
(2) For other members of our party. I’m not a winter sports fan.
(3) Weiner schnitzel, wursts of various kinds, gulaschsuppe, strudel, tortes….
(4) Sattler traveled throughout Europe with the painting from 1829-1839. It is very nice, but a pale shadow of the Gettysburg Cyclorama.  Sorry, Salzburg.
(5) Here’s the short version: The Investiture Controversy was the culmination of several generations of conflict that centered on the relationship between religious and secular power in general and the relative power of the papacy and the Holy Roman Emperor in particular. The issue at the heart of the Investiture Controversy was not the separation of church and state–a concept that would have made no sense to anyone involved–but over who controlled appointments to church offices and consequently the wealth and power which church officials wielded. Secular rulers had long exercised the authority to not only appoint bishops and abbots in their realms, but to perform the ritual that installed them in office. The long-standing conflict came to a head with the consecration of the reformist monk Hildebrand as Pope Gregory VII in 1073. Under Gregory’s leadership, the church issued sweeping reforms for its clergy, including bans on married clergy and simony, or trafficking in ecclesiastical offices. Gregory expanded the definition of simony to include lay investiture of bishops. His ban on lay investiture of bishops was more than a religious reform. It also struck at the power of secular leaders.

Traditional Austrian food, is easy to find in Salzburg, but it varies in quality. I highly recommend both the Gasthof Goldgasse and the Zipfer Bierhaus.

When we reached the point where all the menus seemed to blur together, we were unexpectedly wowed with the food at Bio Burger Meister.

My Own True Love and I were both fascinated by a guided tour of the halls where the concerts of the annual Salzburg festival are held. The halls were originally built in 1606 and served as stables and riding schools for first the Salzburg and later the Austro-Hungarian cavalry through 1918. Today they are glorious performance spaces. If you are interested in buildings and/or the performing arts, put this on your to-do list.