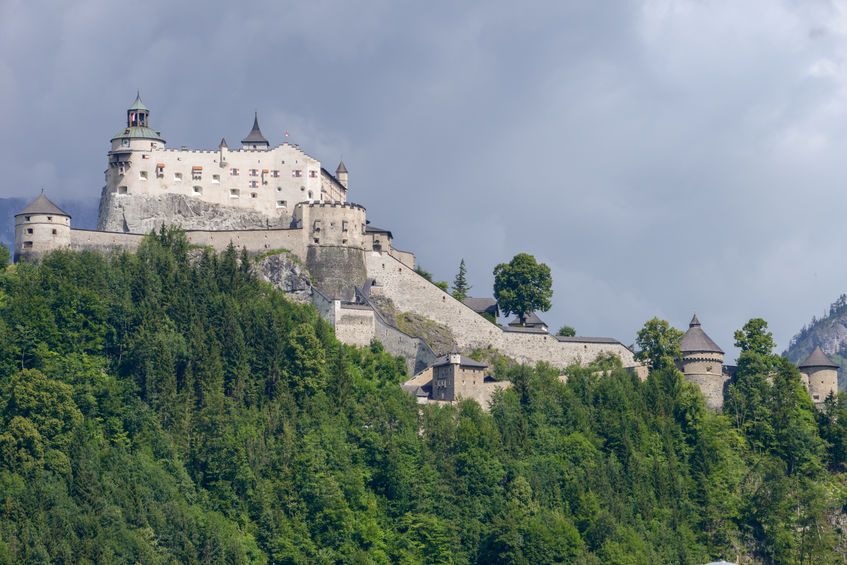 If you only have time for one history nerd adventure in Salzburg, visit the Hohen-Salzburg Fortress. (aka the Festung Hohensalzburg). It will give you a literal overview of the city and its history, and a glimpse of some breathtaking medieval living spaces.

The fortress was built in several stages, beginning in 1077 during the reign of Archbishop Gebhard I von Helfenstein, who reportedly was a bit nervous as a result of the Investiture Controversy between the presumptive Holy Roman Emperor Henry V and papal reformer Pope Gregory VII. (The archbishop, not surprisingly, was on Team Pope. ) Today, the fortress is billed as the largest, best preserved castle in Europe. Like other big hunks of medieval rock that I’ve described on this blog,(1) the Hohen-Salzburg Fortress is built on the high ground. (2) In 1898, long after the archbishops ceased to be secular princes, Salzburg constructed a funicular to make it easier to visit the fortress. The funicular is still a popular way to reach the top, though you can walk up if you are feeling zippy. 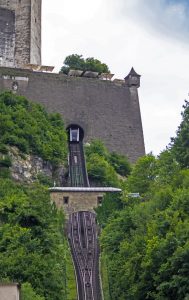 Once you’ve made your way to the top, the fortress is divided into several different exhibits:

Here are a few bits that stuck with me:

Music in Salzburg didn’t begin with Mozart. More than 100 handwritten musical manuscripts are attributed to the “Monk of Salzburg” who lived in the court of the Archbishop Pilgrim von Purcheim (1365-96). He wrote both secular and sacred songs, in an early polyphonic style. I looked for recordings of his work among all the Mozart, with no success. The search is on!

Archbishop Leonhard inherited a state on the skids and rebuilt it into one of the richest and most powerful states in the Holy Roman Empire. As might be expected, he stepped on some toes in the process. Facing difficulties with the burgers of the city, who had been granted the right to an elected council by the Holy Roman Emperor under Leonhard’s predecessor, he invited them to dinner at the fortress to discuss matters. (Word to the wise: accepting invitations of this sort is never a good idea.) Once they were in the fortress he held them captive until they renounced their rights. Incidentally, his family crest was a turnip. 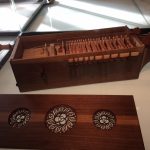 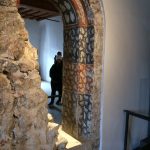 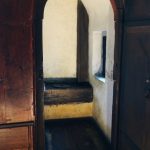 One of Leonhard’s luxuries was a personal water closet (known at the time as a garderobe) off his bedroom.

All told, the fortress was a high point of the trip. (Sorry. I couldn’t resist.)

(2) This is defensive architecture 101. In fact, the first permanent towns that we know of are those of the tel culture, built around the eighth or ninth century BCE in what is now Palestine. The name comes from the Arabic word for hill, and in fact many of these small towns were built on hills—their natural defenses reinforced with massive defensive walls, built of rubble mortared together with mud. The most well known of these fortified hill towns is the multi-layered site of Jericho, also known as Tel es-sultan, located on the Palestinian West Bank. But I digress.

• The various parts of the museum control access so it is never crowded. The flip side of this is that eventually the crowd backs up. Get there early to avoid standing in lines. By the time we were leaving (around noon), the line for the main fortress exhibit stretched outside the main building and toward the walls.

*You already know this, but wear layers. I was very grateful that My Own True Love reminded me that big hunks of rock are hard to heat and that it is often windy on top of battlements. The weather was mild, but I was happy to have that vest on under my coat.

*Live music is everywhere in Salzburg all year long, including the Fortress. Every Sunday musicians perform baroque fanfares from the “Trumpeter Tower.” The fortress is also a venue for a concert series. We attended a lunch concert at the fortress on Christmas Day: the food was nothing special, but the music was fabulous. 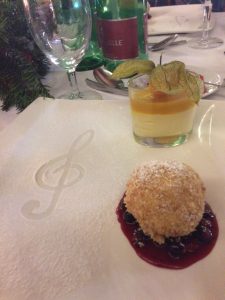