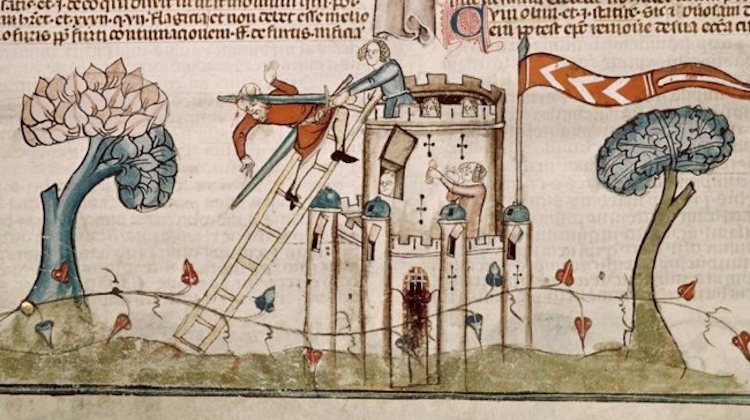 As I believe I’ve mentioned before, in Treasure of the City of Ladies; or the Book of the Three Virtues, author, intellectual, and champion of female education Christine de Pizan (1364–1430) instructed noblewomen of her time to learn the military skills they needed to defend their property: “She ought to have the heart of a man, that is, she ought to know how to use weapons and be familiar with everything that pertains to them, so that she may be ready to command her men if the need arises. She should know how to launch an attack, or defend against one.” It was good advice. Noblewomen and queens often found themselves leading the defense of a keep, castle, or manor (and occasionally besieging someone else)—even if they didn’t have “the heart of a man.” (1) (Occasionally, not-so-noble women also found themselves under siege. Margaret Paston (1423–1484), the wife of a wealthy landowner and merchant, defended besieged properties three times against noblemen’s attempts to seize them by force.)

The skills needed to withstand a siege were an extension of housekeeping when the idea that a man’s home was his castle was a literal description for members of the aristocracy. In medieval and early modern Europe, noblewomen were often responsible for managing family properties, and consequently for providing the military resources needed for those properties. Provisioning a household that was as much an armed fortress as a family domicile involved procuring the cannons, small arms, and gunpowder needed for its defense as well as the day-to-day supplies of food, clothing, or household linens. Noblewomen supervised men-at-arms in the course of daily life and helped mobilize the household’s resources for war. Leading its defense was one more step down a familiar road.

We find stories of women organizing the defense of a besieged castle/keep/manor in sixth century China, in the dynastic wars of medieval Europe, in the religious wars of seventeenth century England and France and in shogunate Japan. (2) Some led their men-at-arms into battle, weapons in hand. Most harangued the enemy and encouraged their troops. (Sometimes they also harangued their men-at-arms. In 1584, the wife of samurai warrior Okamura Sukie’mon armed herself with a naginata, (3) patrolled the besieged castle, and put the fear of the gods in any soldiers she found asleep while on duty.) More than one noblewoman, such as Hungarian nationalist Llona Zringyi (1644–1703) walked her ramparts at twilight in full view of the enemy, giving the besieging army a metaphorical middle finger.

For the most part, these women led the defense in the absence of their fathers/husbands/brothers/sons—who were often fighting elsewhere. In the case of Nicolaa de la Haye (ca. 1150–1230), the castle she defended was her own. De la Haye inherited the offices of castellan and sheriff of Lincoln when her father died in 1169 with no male heirs. In that role, she became involved in the conflicts surrounding the absentee King Richard the Lionhearted, his brother John, and England’s barons, that resulted in the Magna Carta. (De la Haye was on Team John.) (4) As castellan, she successfully defended Lincoln Castle twice, once in 1191 and once in 1216. Her resistance during the second siege led her enemies to describe her as a “most ingenious and evil-intentioned and vigorous old woman.” I suspect she took that as a compliment.

(1) I can’t tell you how tired I got of the many variations on “the heart of a man,” “manly courage”, “as capable as a man” while writing Women Warriors .)
(2) Japanese “castles” in the twelfth century were wooden stockades—more like a fort in the American West than a medieval European keep.
(3) A traditional weapon of samurai women, the naginata is a curved blade on a staff, similar to a glaive. Samurai women also carried a long dagger in their sleeves called a kaiken, sometimes referred to as a suicide dagger.
(4) We (and by that I mean Americans) tend to assume that John was the villain of the story because the only things we learn about him is that he was forced to sign the Magna Carta, which is seen as the documentary forefather of our own Constitution and Bill of Rights. (Not to mention his appearance as a villain in the Disney film Robin Hood.) In fact, Richard wasn’t exactly a stellar king from the British perspective. He was more interested in crusading in the Holy Lands than in ruling. During the ten years of his reign as King of England, Duke of Normandy and Count of Anjou, (5) he spent no more than six months in England, and is reported to have said that he’d sell the place if he could find a buyer.  Not a model king by any standard.
(5) Which began with him conspiring with his mother (Eleanor of Aquitaine) and the king of France to seize the throne from his father . (Not for the first time. He had previously joined two of his brothers in an unsuccessful rebellion in 1173.) Happy family.

And now for a word (or three) from our sponsor: 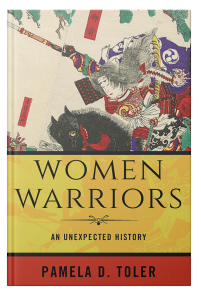 1. You still have time to win a copy of Women Warriors.  Beacon Press is giving away 20 copies of Women Warriors on Goodreads. Enter here by 2/15 to be included: https://www.goodreads.com/giveaway/show/288662

2. We’ve got swag! If you buy the book by 2/25 and want women warrior trading cards, a book mark and a signed bookplate, fill out this form and upload your receipt: www.beacon.org/warriorspreorder Just so there’s no confusion:  You don’t have to buy the book (or e-book or audiobook) directly from Beacon: pre-orders from any vendor count.