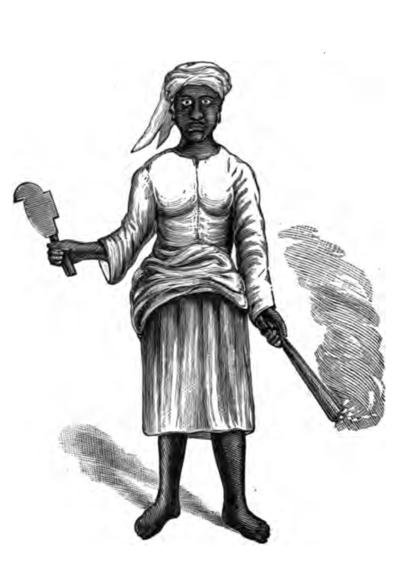 A year ago a news article about a statue in Denmark popped up on my Google alert for “women warriors”.(1) Titled “I Am Queen Mary”, the statue was inspired by a woman who led a revolt in the Danish colonies in the Caribbean I was intrigued for many reasons, including the fact that Denmark and Caribbean colonies are not two ideas that occupy the same slot in my mental filing system. (2) But I had just received edits for Women Warriors, and I couldn’t stop to track down one more story. So I added Mary Thomas and her revolt to the list of things to think about later, along with the other stories I stumbled across in the final weeks of working on the book,.

Mary Thomas was one of three women, known as the “three queens” who led a labor uprising called the “Fireburn” in 1878.

Harvests had been poor throughout the 1870s and hopes for better times were squashed when rumors about improvements in the labor law of 1849 proved to be just that, rumor.

The uprising began on October 1st, when many of the workers on St. Croix were gathered in Fredericksted for “job-change day”. As is often the case when large numbers gather, there was celebration and drinking in the streets. (I’m picturing St. Patrick’s Day in Chicago, with an undercurrent of anger.) Eventually, things got rowdy enough that the authorities got nervous and tried to clamp down on the commotion. As so often happens in such cases, this became a self-fulfilling prophecy. A man named Henry Trotman was injured—badly enough to be hospitalized. Rumors spread that Trotman had died as a result of his treatment by the police. The violence the police had hoped to avoid escalated. The police and the military retreated to the fort in Frederiksted to escape the angry crowd. Unable to breach the fortress, rioters set buildings on fire and looted shops in Frederiksted and torched some fifty plantations surrounding the city before supporting troops arrived the next day.

Three women led the revolt and are considered national heroines in the Virgin Islands today: “Queen Mary” Thomas, “Queen Agnes” ( officially Axeline Elizabeth) Salomon, and “Queen Mathilda” McBean. (Mary preferred the title “Captain”.) All three were arrested, tried for their role in the uprising, and sent across the Atlantic to serve out their sentences in a women’s prison in Copenhagen. Presumably so their presence would not provide a rallying cry for others to renew the revolt.

Henrik Holm, curator at Denmark’s National Gallery of Art, summed up the importance of the statue and others like it: “It takes a statue like this to make forgetting less easy. It takes a monument like this to fight against the silence, neglect, repression and hatred.”

( The illustration above is from an 1888 publication titled Leaflets from the Danish West Indies.  The regal figure in “I Am Queen Mary” holds the same two implements:  a torch and a tool used to cut sugar cane. I couldn’t find a picture of the statue that wouldn’t violate someone’s copyright. You can see it here.   The details are all the same, but the general effect is completely different.)

(1) Google alerts are the writer’s friend. Though I must admit, an awful lot of news about women sports teams pops up in that feed. Go, Warriors!

(2) We all have historical blind spots, though it always chagrins me when I discover one of mine. In fact, the Danish West Indies, made up of the Islands of St. Thomas, St. Jan (now St. John), and St. Croix, were a colonial possession from 1672 to 1917, when Denmark sold the colony to the United States for 25 million dollars. (One of those pieces of American history that slipped by me.)

The Danish West Indies, like other colonial possessions in the Caribbean, were developed as sugar producing colonies and like other plantation economies in the region they were dependent on slave labor. Denmark banned the slave trade in 1792— 15 years before England and the United States. (Passing a bill isn’t the same thing as enforcing it.  Danish ships continue to carry slaves from Africa to the Caribbean until 1803.) But as in other slave owning countries, banning the slave trade was not the same thing as banning slavery. In fact, fifty years passed before Denmark abolished slavery in 1848. A year later, Denmark passed a law regulating the working conditions of the newly emancipated slaves, including a (low) day wage and a rule that workers could only change jobs once a year , on October 1st. Not a labor-friendly regulation