When I asked the people at Beacon Press whether there were other Beacon authors who would be a good fit for this series, several people immediately answered Scott Stern, author of The Trials of Nina McCall: Sex, Surveillance, and the Decades-Long Government Plan to Imprison ‘Promiscuous’ Women.

The book is the account of a little known program in which the United States government detained and quarantined thousands of American women, usually without due process, because they were suspected of being prostitutes, transmitting sexual diseases, or being “promiscuous”. He tells the story though the lens of a single woman, Nina McCall. McCall was eighteen when she was locked up for three-months in 1918 as a result of allegations that she had engaged in pre-marital sex. She unsuccessfully sued the government over her treatment.

Stern’s path to writing is basically the exact opposite of mine. The subject of his book caught his imagination seven years ago, when he was a college freshman. He worked on it as he completed his undergraduate degree and a masters in American studies for Yale, and then took two years to finish it.  He is now at Yale law school. The book has been optioned for a film.

I don’t know about you, but I feel like a slug by comparison.

Take it away, Scott: 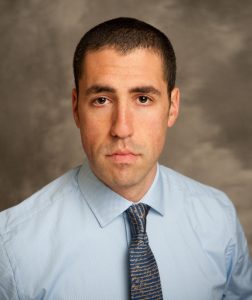 Oh wow, this is tough – there are so many amazing authors working today. I’m going to divide this list into three groups: (1) academic authors; (2) other nonfiction authors; and (3) fiction authors.

(1) Heather Ann Thompson is such an incredible historian, detective, and storyteller, and I’m dying to read her next book (on the MOVE bombing in Philadelphia). Kim Phillips-Fein and Edward Baptist are changing the way scholars understand capitalism, and Jeanne Theoharis and Danielle McGuire are changing the way we see the Civil Rights Movement. Other amazing academic writers are Kelly Lytle Hernández, Timothy Stewart-Winter, Eve L. Ewing, Lisa McGirr, Keeanga-Yamahtta Taylor, Barbara Ransby, and two former teachers of mine, John Demos and Glenda Gilmore. Richard A. McKay wrote one of the most exciting history books I’ve read in literally years, and I can’t wait to see what he does next. I’m positively dying to read Kevin Levin’s and Beverly Gage’s forthcoming books. I don’t know if he’s working on anything new right now, but Allan Brandt’s two books changed the way I see the world – twice. And finally Jill Lepore’s creativity (and productivity!) continue to inspire me.

(2) Well let’s start with Roxane Gay (of course she is also an academic, but I’ve only read her non-scholarly work). Kate Aronoff writes the absolute best stuff on climate change, though Ben Wallace-Wells comes in close second. No one writes about race like Ta-Nehisi Coates, except maybe Michelle Alexander. I love all the historical work Jamelle Bouie has done. There are some remarkable critics writing today, including Andrea Long Chu, Anne Helen Petersen, and Jia Tolentino. Emily Nussbaum and Aaron Bady write the absolute best television criticism, hands down. I would read Sam Quinones’s shopping list. Matt Taibbi has always been enraged and inspired me. Obviously Ronan Farrow and Jane Mayer are changing the world. I really wish Isabel Wilkerson would write another book. Who else? Well, Osita Nwanevu is doing great work. Sam Lansky has a new book coming out, and I cannot wait. David Sedaris and Lindy West always makes me laugh, and sometimes gets me choked up a bit too. Nathan J. Robinson and Hamilton Nolan are each a joy to read, in large part because they inspire such righteous anger. And Elie Mystal for all things law-related.

(3) Ann Patchett always brings me joy. Rebecca Makkai probably moved me the most last year, and I hope she writes something new soon. Katherine Heiny is so wonderful, as is Susan Rieger. Richard Powers, Stephen Markley, and Nathan Hill all recently wrote these “epic” novels that totally blew me away, but the queen of epic novels is Donna Tartt – it’s a shame we’ll have to wait another decade or so for her next masterpiece. Elizabeth Strout never ceases to amaze, and neither does Colson Whitehead. Apparently Tea Obreht has something new coming out! Jordy Rosenberg is doing such exciting work. I hope Lev Grossman and Angie Thomas each come out with something new very soon. And, of course, I could never forget J.K. Rowling.

Over the last seven years, I spent a lot of time at the National Archives at College Park, MD, immersing myself in government documents. In the midst of that research, I kept coming across scattered references to something I’d never heard of before: apparently during World War I, the U.S. military banned white soldiers in many training camps from talking with, or even being physically near, black women. I came across several references to this, so I looked it up and couldn’t find anything in the existing literature. The existence of this disgustingly bigoted policy didn’t really surprise me – after all, I was researching other bigoted government policies from the same time period. But I was shocked I’d never heard of it, and even more shocked that I couldn’t find anything written about it. I ended up writing a short blog post about it, but someone more knowledgeable really needs to do more research on this!

Why do you think stories like that of Nina McCall disappear from mainstream history?

I think there are a variety of reasons why Nina was forgotten. First, and most obviously, there is very little documentation of nearly everyone who lived a hundred years ago; this makes it very hard for historians to track down people who weren’t famous or powerful. Second, Nina died relatively young, had no children who survived into adulthood, and – remarkably for someone of her generation – left behind no nieces, nephews, or cousins who were close enough to remember her and still be alive. Yet to me the third reason is the most important. Nina was not just forgotten; her presence and voice were deliberately erased. Government officials intentionally marginalized and silenced her. They abducted her and incarcerated her in an institution that strictly limited her freedom of speech. Later, they were complicit in the maintenance of a culture that so stigmatized her incarceration, and her sexuality in general, that she was ashamed to tell anyone where she had spent those months of humiliation and pain. This pattern of silence and marginalization is among the reasons Nina – and the broader American Plan – are not better known today.

Question for you: I was once in a seminar and another student said that for a book to be good, it must “disturb” you. That’s always stuck with me. Was she right?

Perhaps Christopher Morley says it best, in one of my favorite books, The Haunted Bookshop. The owner of the bookshop in the title tells a young advertising writer, “Between ourselves there is no such thing, abstractly, as a ‘good” book. A book is ‘good’ only when it meets some human hunger or refutes some human error. A book that is good for me would very likely be punk for you.”

I agree a good book engages more than just your brain. But there are many more ways to engage the emotions than simply “disturbing” you. Just for a start, they can open doors, give you a safe place, let you know you aren’t alone, ease your sadness, or let you walk in someone else’s shoes for a brief time. 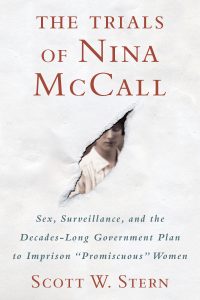 If you want to learn more about Scott Stern and The Trials of Nina McCall:
Follow him on Twitter: @ScottWStern
Read this thoughtful review: https://nyti.ms/2Hlhi8K

(Drop in on Monday for another Telling Women’s History interview. I’ve got an entire month of some of my favorite history people talking about the work they do and how they do it. Next up: Nancy Marie Brown, author of several books in which Viking women play a major role.)