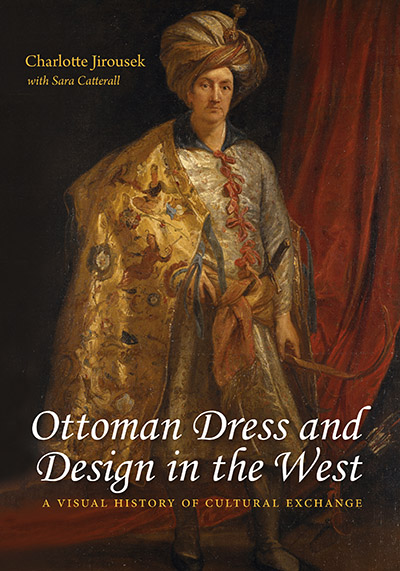 Those of you who have known me for a long, long time might remember that I once wrote a proposal for a book on how Islam influenced Western culture in fundamental ways.(1) Those of you who’ve known me even longer know that my dissertation was titled Building the Orient of the Imagination: Excess, Confusion and Violence in Orientalist Painting and Literature. (2) In other words, I’ve been interested in cultural and economic interaction between the Islamic world and the West almost as long as I’ve been interested in women warriors.

Which means that I lit up like a pinball machine when a bookish friend of mine named Sara Catterall mentioned that she was finishing a book written by her mother, textile and apparel scholar Charlotte A. Jirousek, titled Ottoman Dress and Design in the West: A Visual History of Cultural Exchange. I may have even had a “tilt” sign flashing over my head.

Last week I carried her (their?) with me on a trip home to the Ozarks, where I gobbled it down between visits with my family and research appointments on a possible book topic. (3) And while Ottoman Dress and Design in the West is far too beautiful for me to scribble in the margins or mark up with a highlighter, it is annotated with discrete check marks, question marks, and exclamation points, as well as an occasional line alongside an entire passage.

My favorite type of academic writing—and make no mistake, this is an academic book—uses a very specific lens to consider broader issues. Jirousek and Catterall are in this tradition. They have crafted a serious piece of scholarship that illuminates trade patterns and cultural exchanges through changes in dress and design. The prose is clear and jargon-free. The illustrations are both gorgeous and useful.(4) (If you want a peek, check out the Instagram feed ottomandressinthewest.) And wonderful insights are scattered through the text almost off-hand. Here are a handful of my favorites:

If you’re looking for a pop culture book on the history of fashion, Ottoman Dress and Design in the West is not your book. But if you are interested in serious history of fashion, cross-cultural exchanges, or the place where the two collide, grab yourself a copy.

(1) It didn’t sell, alas! But it was a masterclass in how to write a book proposal and an object lesson on why not to talk about a project to your friends too early in the process.

(2) Which included early versions of asides in the footnotes

(4) I’m in awe at the sheer number of them, knowing the agony I went through getting permissions for ten measly illustrations for Women Warriors.