The Eiffel Tower opened to the public 130 year ago this month, a fact that is being celebrated in a low grade way in the news.  And why not?  We need all the good news we can get.

In that spirit, I offer you a piece which originally appeared in History in the Margins in August 2016. 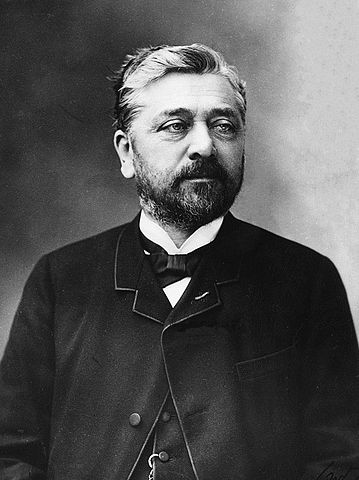 Alexandre-Gustave Eiffel, the engineer who designed the Eiffel Tower, reportedly said “I ought to be jealous of the tower.  It is more famous than I am.”

It’s probably true.  Eiffel was a world-famous engineer before he made the tower that bears his name, but not for the kind of things that make a man a household name.  He built his reputation as a bridge designer, though his company also designed and fabricated metal frameworks for buildings like train stations and exhibitions halls.(1)  By the 1880s, Eiffel was the man you called when you had a technical challenge that needed a metals expert.  He designed the railroad station in Budapest, the Bon March department stores in Paris, covered markets, gasworks, iron framing for Notre Dame Cathedral, and prefabricated mobile campaign bridges for the French army.  Not to mention bridges and train stations throughout Europe, Asia and South America.  His work as a whole was known for its lightness, grace and strength–qualities that would come to define the Eiffel Tower.

His most famous project prior to the tower was designing the internal armature for the Statue of Liberty.  Sculptor Frédéric-Auguste Bartholdi wasn’t sure how to translate his beautiful plaster model of Lady Liberty into a finished statue.  Not only was the proposed statue enormous,(2) but it had to be constructed in such a way that it could be disassembled for transport to New York and reassembled on arrival.  Eiffel was the man for the job.  He proposed the construction of a weigh-bearing iron frame to which thin sheets of copper could be attached, making a lighter, stronger statue.(4)

Eiffel brought that same sense of innovative technique and creative problem solving to the creation of the Eiffel Tower.

The tower was intended to be a temporary installation, built as part of  the Paris World’s Fair of 1889, which celebrated the one-hundredth anniversary of the French Revolution. More than one hundred artists submitted plans to build a monument on the Champs-de-Mars at the entrance to the exhibition.  Eiffel won the commission with his design for a soaring wrought iron tower.

The plan called for more than 18,000 wrought iron pieces and 2.5 millions rivets to be assembled in an open-latticework tower on a four-acre base of reinforced concrete.  Four piers tapered upward and converged at the top, punctuated by two platforms that provided the tower with structural stability and gave exhibition-goers a spot from which to view the city  below them.  Despite its lacy appearance, the only elements of the tower that do not contribute to its structural integrity are the grill work arches that link the bases together, which Eiffel added to reassure visitors that the structure was safe.

It took two years, two months and five days to build.  On March 31, 1889, with the last rivet in place, Eiffel climbed the 1,710 steps to the top and unfurled an enormous French flag.(5) When complete, Eiffel’s tower rose 986 feet into the sky–making it the tallest structure of its time, a distinction it would hold until the completion of the 1,046-foot Chrysler Building in 1930. The tower was the most popular attraction at the exhibition.  People waited in line for hours for the opportunity to go up.

The tower earned Eiffel the nickname “magician of iron.   It also shaped his future career.  As a result of his experience in building the tower, Eiffel became interested in questions of the impact of wind resistance on buildings. He installed thermometers, barometers and anemometers on the third platform of the tower, which allowed him to monitor weather patterns. He mounted a radio antenna on the building, which he  later used to develop his own radio network. He built a small wind tunnel on the second platform, which he used to experiment with air resistance, including the creation of an equation for propeller design that helped French engineers make improvements to the new flying machines.  When people complained about the noise,  he built the first aerodynamics lab outside the city, with a bigger wind tunnel,  where he worked though the end of the first World War.

(1)A new-fangled technique made popular in 1851 by the “Great Exhibition of the Works of Industry of All Nations”, aka the Crystal Palace.

(2)111 feet six inches tall. Not including the pedestal, which brings the total height to 305 feet, and that pesky six inches. I was led to check this by one writer’s claim that when it was built the Statute of Liberty was the tallest statue ever made. My immediate instinct was to check the size of the ancient Colossus of Rhodes, which was famous for being well, colossal. The Colossus of Rhodes reportedly stood 110 feet, not counting its 50 foot pedestal.(3) The two statues were related by more than just size. The Colossus of Rhodes was also built as a symbol of liberty at the end of a long painful war between Rhodes and Egypt in 292 BCE. Bartholdi’s statue echoes the presumed pose of the Colossus. Since the Statue of Liberty was also known at the time as the “Modern Colossus”, I can’t help but feel that last eighteen inches was deliberate. But I digress.

(3) Though I’m not sure how we know this, since the statue was destroyed in an earthquake in 226 BCE.

(4) The Colossus of Rhodes was built with bronze plates over an iron frame. Just saying.