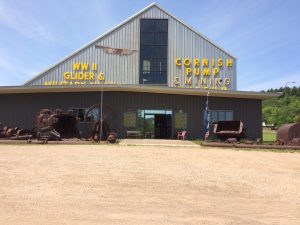 Recently My Own True Love and I turned one of my speaking gigs(1) into a road trip around Lake Michigan.  First history stop on the itinerary? The WWII Glider and Military Museum in Iron Mountain, Michigan.

Compromise is the essence of any road trip. As a result, I’ve visited a lot of small aviation museums over the years. (3) Some of them are just accumulations of stuff. But a few are gems. The WWII Glider and Military Museum is definitely one of the gems.

The museum at Iron Mountain is a cut above the average small aviation museum for a lot of reasons. The original CG4A glider that stands at the center of the museum has been impeccably restored and is displayed with imagination. Exhibits illustrate how the glider was constructed and describe how it was used in the war . More importantly, the museum tells the larger story of the men who made the gliders and the town in which they were made. 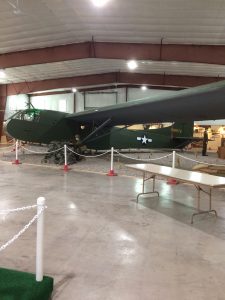 The story begins, as stories based in Michigan in the early twentieth century so often do, with Henry Ford. In the 1920s, the primary industry in the Upper Peninsula of Michigan was logging. Ford had a serious need for lumber because the Model T was built largely of wood (4), so he bought many, many acres of timberland in the area around Iron Mountain. He soon realized that it would be cheaper to build automobiles near the timber than to ship it south to Detroit. In 1925, he built an automotive plant just outside Iron Mountain in what is now Kingsford Michigan. (5)

In December, 1942, the Ford plant in Iron Mountain stopped making wooden-sided station wagons and started making gliders as part of the war effort. The plant produced more than half the gliders made in the United States during the war. Between December 1942 and the end of the war in 1945, 4500 men worked three shifts to produced eight gliders a day. The plant won the E award for excellence in production three times.

The WWII Glider and Military Museum uses a well curated collection of artifacts, reconstruction, and vintage photos and film footage to tell a story of the war on the home front.

Well worth a visit even if you aren’t a aviation buff.

(1)If you belong to a group that needs speakers(2) and would be interested in hearing about women warriors, Civil War nurses, or writing about history, give me a shout at pdtoler@sbcglobal.net. Early 2020 is filling up. Which I find amazing me, but there you go.

(3) And My Own True Love has visited a lot of archeological sites, as close as southern Illinois and as far away as Troy (in Turkey, not Michigan)

(4) This probably doesn’t come as a surprise to those of you who are interested in cars, but it was news to me.

(5) The original home of Kingsford Charcoal Briquets, which were made from the wood waste of the plant, including sawdust. Henry hated waste and could squeeze a penny as well as anybody.