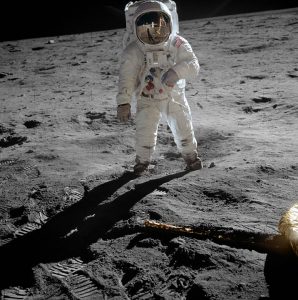 Several years ago* I was at the Adler Planetarium with my youngest sister. We stopped and watched a video of the first moon landing. At the end, I turned to her and said “I don’t think I’ve ever seen this in color before.” She answered, “I’ve never seen this before.”

Not surprising. She was less than a month old at the time. (For the record, I had just turned eleven.)

As I write this the 50th anniversary of the first moon walk is almost upon us. I had intended to write about my memories of the moon walk. But when I sat down to write, I realized that my personal memories are about watching the moon walk, not about the event itself.

It was hot and sticky, as July days so often are in Missouri Ozarks. We were gathered in the living room, watching a small black and white television. The windows were open and a fan was blowing, because we did not yet have air conditioning. In my memory, it was afternoon—which suggests that I remember the landing rather than the walk itself. It’s possible that I have all the details wrong. (Except the heat and the humidity. That I’m positive about.)

If truth be told, I have far more vivid memories of earlier rocket launches. When they occurred on a school day, everyone in my grade school carried their chairs to the all-purpose room. Sitting in tidy rows, we watched the lead-up to the launch and then counted down with the television: 10. 9. 8. 7. 6. 5. 4. 3. 2. 1. BLASTOFF! My memory is hours of mind-numbing boredom ending with a few seconds of excitement.

Even in the case of those earlier launches, my memory is more about the experience of watching than the events themselves.

At some level, that is always what we remember about the big historical events that we did not actually participate in. The kind of event that punctuates our lives, that may even shape our lives from a distance, but in which we did not play an immediate role. No one asks you, “What happened when Kennedy was assassinated?” They ask, “Where were you when you heard that President Kennedy was assassinated? What were you doing?”

*And by several years, I mean at least twenty and possibly more.

I’d like to give a shout-out to excellent works by two of my writer friends that look at the moon landing from slightly different and fascinating angles:

I Love You, Michael Collins by Lauren Baratz-Logsted is a middle-grade novel centered on the moon walk, as seen from the perspective of a 10-year-old girl whose family is falling apart. It made me laugh. It made me cry. And it made me think about the moon landing in a very different way. Highly recommended for adults as well as kids.

Erin Blakemore had the opportunity to interview Poppy Northcutt, the only woman who was part of Mission Control for the Apollo flights. It’s a good one: Inside Apollo Mission Control As Seen by the First Woman Engineer