In Meredith Wilson’s 1957 hit musical The Music Man, con man Professor Harold Hill sings out about “ragtime, shameless music” as one of the pending disasters that threaten Riverside if the parents of the town don’t get their collective act together.

It’s intended to be funny. In 1957, parents were facing new musical threats that could grab their sons and daughters “in the arms of a jungle animal instinct.”* By comparison, ragtime was delightful, old-timey music.  Nothing transgressive about it. 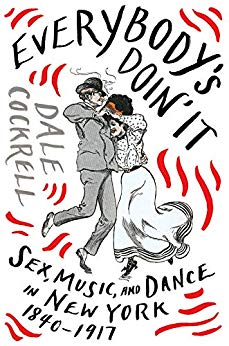 In fact, as musicologist Dale Cockerell makes clear in Everybody’s Doin’ It: Sex, Music, and Dance in New York, 1840-1917, an earlier generation believed ragtime was indeed “shameless music” that threatened the social as well as the musical status quo.

Cockerell traces the connection between popular music and and the disorderly world of New York City’s brothels, bars, dance halls, concert saloons and “Raines Law hotels”** in the period between the first blackface minstrel shows and the rise of jazz. Writing about a time when “dives” were literally located in below-sidewalk cellars, Cockerell demonstrates a symbiotic relationship between rowdy dancing inspired by equally rowdy music and the flourishing business of prostitution.

Because his subjects often lived below what Cockerell calls “the horizon of record,” many of his sources are middle-class observers who wrote about the music and its audience with disdain. (Some of the most explicit accounts come from undercover investigators hired by various reform societies to provide evidence of immoral activities.) These accounts refer to the “alleged music” produced by musicians and singers with no formal training. They describe erotically charged “tough dancing,” from the imported cancan to “animal dances” like the turkey trot and the bunny hug. They detail sexual solicitation in graphic detail, as well as undercover agents’ sting operations.

Never letting the reader forget the inherent bias of his middle-class, largely white, sources, Cockerell evokes a kaleidoscope of colorful characters and institutions without ever losing track of the poverty on which his subject rests. He raises complicated issues of class, gender and race, issues that would shape the development of American popular music in the coming decades.

*Yep, that is just as racist as it sounds.

**The Raines Law, passed in 1896 by the New York State legislature, was intended to regulate alcohol consumption, particularly alcohol consumption by working class men.  The law made it illegal to sell alcohol on Sundays except in a hotel. In order to get around the regulation, saloons opened furnished rooms upstairs and began to serve sandwiches with drinks.  The rooms were loosely defined–sometimes demised with no more than a thin fabric curtain–and scantily furnished.  They soon became a convenient place for prostitutes to retire with their customers.  Can you say “unintended consequences”?

Much of this post previously appeared in Shelf Awareness for Readers.