About a year ago, I posted a review here in the Margins about a fabulous book: The Strange Case of Dr. Couney: How a Mysterious European Showman Saved Thousands of American Babies. (I was not the only person who loved it. NPR named it one of 2018’s Great Reads and it made the New York Times’ “New and Notable” list. ) This week the book was released in paperback, which gave me the opportunity to ask Dawn a few questions about the book, her research, and the story. Fascinating stuff!

Take it away, Dawn 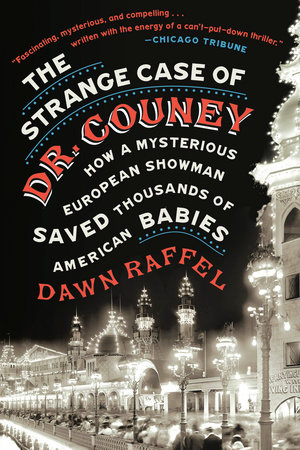 What led you to Dr. Couney’s story?
I had planned to write a novel set at the 1933-34 Chicago World’s fair and was doing archival research when I came across eye-popping photos of Dr. Couney’s incubator sideshow on the midway. When I discovered that Dr. Couney had also been at Coney Island for forty years—that this was far from a one-off—I postponed the novel to get to the bottom of this stranger-than-fiction piece of history.

Dr. Couney repeatedly changed his name and re-wrote his past in some fundamental ways.  How do you untangle the history of a man who spent so much time reinventing himself?
That was quite a challenge. It included a deep-dive into vital records, such as probate documents for anyone associated with him. In the archival file containing his daughter’s will, I found a reference to his original name, which was a big break. Tracking down his immigration and naturalization records took almost a year, as those documents are not centrally located, and I was originally looking in the wrong region of the country, in the wrong decade, based on the story he told the press. I pulled out passport applications, ship manifests, business incorporations, birth, marriage, death, and burial records, a bankruptcy record, and transcripts of meetings with concessions committees for various world’s fairs. Finally, I found a descendant. This person would not be quoted but told me knowingly that if I had done my homework and had arrived at certain conclusions, they would not dispute my findings.

You had the opportunity to meet several of Dr. Couney’s “babies”.  What was it like to meet them?  How did they feel about having their story told after all this time?
This was the best part of the research! I loved meeting the babies, and it was they who kept me going at times when I thought I would never be able to piece together this story. They were thrilled about having this history told, and they all wanted to hear about and meet the others. Several more “Couney babies” came forward after the book was published. The oldest was 98 years old and sharp as a tack. Not one person resented having been placed in a sideshow. They simply felt that Martin Couney had saved their lives, and they thought the sideshow part was kind of cool. I’ve even seen a few newspaper obituaries that have mentioned beginning life in Martin Couney’s sideshow as a mark of distinction.

As someone who trained as an academic historian, chronological order is my default position.  You chose a different structure for The Strange Case of Dr. Couney.  (Not a complaint.  It worked really well.)  Why did you make the decision to not use simple chronology to tell your story?
The first draft was in chronological order, and it made for surprisingly flat reading—there was a kind of same-y progression from one exhibition to another. Reluctantly, I decided to move things around, pulling back the curtain on the long years that it took me, and before me, a group of doctors calling themselves the Couney buffs, to get to the bottom of the story. Essentially, there are two narratives lines—one that takes place during Couney’s life and one that follows the investigation after his death. I did it to create more narrative tension, and also to show just how complicated his deceptions were, and how many people were involved in seeking out the truth. I also wanted to introduce the reader to the surviving “babies,” now that they are in their 70s, 80s, and 90s. The book went through four drafts, plus a fifth for additional fact-checking, and all I can say is that my editor and agent both found it to be a better read in its final form. I’m glad you think it works!

What was the most surprising thing you learned working on this book?
I was shocked by the full horror of the American eugenics movement. It’s a shameful chapter of our history that has only recently begun coming more fully to light. Although eugenics did not directly target preemies, they were called “weaklings” in the medical literature, and their prospects were dimmed by a survival-of-the-fittest attitude. Dr. Couney, and later his robustly credentialed friend Dr. Julius Hess, proved again and again that preemies could be saved—their bigger battle was convincing the public, the medical establishment, and the makers of public health policy that they should be saved.

Why is the story of Dr. Couney and his crusade to save babies important now?
It’s easy to look back in time and feel superior to previous generations. But we continue to make decisions about which lives are worth saving and who gets to live. Medical advances from genetic testing and editing to geriatric life-support only make these questions harder. And while we’re at it, if your insurance won’t cover a procedure, there’s no Dr. Couney to come save you. Some people have argued that his sideshows—where patients’ care was paid for by audience admission—were the original medical crowd-funding! More importantly, this story is a reminder to be very mindful of how these “quality-of-life/is it worth it?” decisions are made. It’s also a reminder that advances and innovations may well come from outside “the academy.”

If you want to learn more about Dawn and her work, you can check out her website: https://www.dawnraffel.com/