If you’ve spent any time here on the Margins, you know that I love to go traveling with My Own True Love, and that I love to share stories about our travels with the Marginalia. In fact, we’re heading out soon for another stint on our on-going efforts to drive the Great River Road from the headwaters of the Mississippi in Lake Itasca, Minnesota,  to the place in Louisiana where the road finally dead-ends in industrial parks. *

But traveling as a pastime and writing blog posts about what you learn is different than Traveling on a larger scale and writing a Travel’s Account. 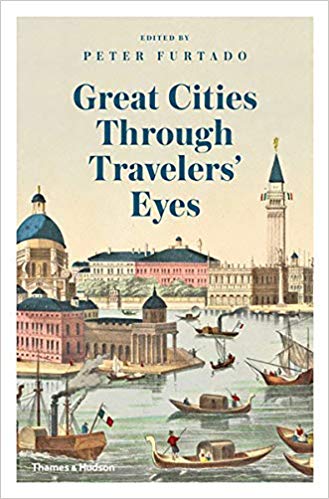 In Great Cities Through Travelers’ Eyes, historian and former editor of History Today magazine Peter Furtado has compiled an armchair travelers’ delight. Building on the idea that cities are the most enduring of all historical artifacts, he presents travelers’ accounts of 38 cities around the world, from Alexandria to Washington, D.C.

Furtado outlines his selection criteria clearly for the reader. All the cities still exist: no romantic musings on the ruins of Persepolis or Machu Picchu are included. He does not use descriptions by a writer native to a city. For example, Furtado gives us Dickens’s opinions of New York and Rome, but turns to writers from Switzerland, China, the United States (via France) and Germany for impressions of London. He does not draw on travel accounts later than the 1980s because he believes that cheap airfares and the Internet have fundamentally changed the experience of travel and travel writing.**  Within those criteria, he carefully chooses a wide range of sources from across the centuries and around the world. Men and women. Merchants, conquerors, explorers, pilgrims, journalists and monarchs. (Queen Victoria was mildly pleased with Paris.)

Even without entries from the last 30 years, Furtado gives the reader a complex, and sometimes opinionated, picture of cities through time. Presented chronologically, the entries for each city function as a shaft in a literary archeological dig, allowing the reader to see both change and continuity in how a city is portrayed. The entries also give us an anecdotal history of travel itself, pre-TripAdvisor and and Google Earth.

It’s enough to make you want to pack a trunk and make a Grand Tour.  In the short run, however, I’ll make do with a small suitcase, a work bag, a cooler and a road trip.

* We started the project in 2014 with a four-day weekend in Illinois.  We’ve done two big stints since then.  And I’ve shared it with you all the way–or at least most of the way.  (I seem to have missed blogging about the last few spots we stopped at in 2015, including the national battlefield at Vicksburg.)  If you’re interested, you can find those posts by searching for Great River Road in the box in the sidebar.  (If you’re reading this in your email, click the headline.  This will take you to the browser, with the search function, and other goodies.)

**While this may, in fact, be true it also carries a whiff of an old guy complaining that the world has changed and is consequently going to hell.  Which may also be true, but “old guys” of all ages and genders have been making this complaint for as long as we have written records of individuals’ opinions.