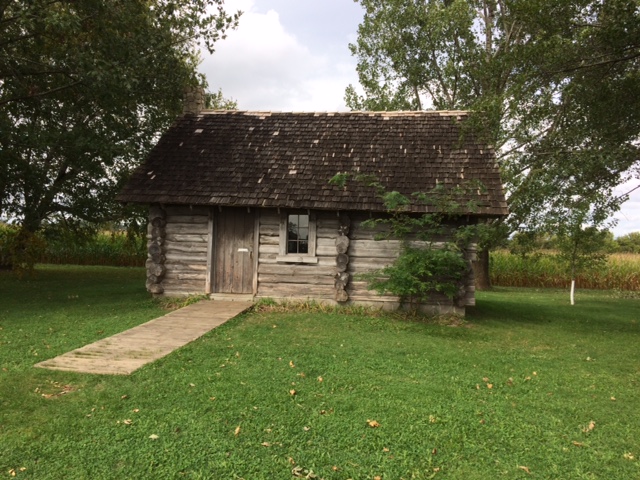 I grew up in the Missouri Ozarks, not far from Mansfield, Missouri, where Laura Ingalls Wilder, author of the Little House books, lived from 1897 to her death in 1957. I remember being thrilled when my family took a day trip to visit her home, probably in the late 1960s soon after it was made into a museum. *

From my perspective, the Mansfield house is the Laura Ingalls Wilder home. (And there is some justification for that perspective. It’s where Wilder wrote the books that made her famous.** ) So I was surprised to discover as we moved north into Wisconsin that we were in the neighborhood of another Wilder site: the Laura Ingalls Wilder Wayside, located near Pepin, Wisconsin.***

The Wayside is a replica of the cabin where Wilder was born, built on the original site of the Wilder farm. The cabin is open everyday, dawn to dusk. There is little interpretive material: a historical marker outside and a small display of letters and other material inside. The audience seems to be people who know and love the books—and their patient companions. I found the experience unexpectedly moving.

There is a Laura Ingalls Wilder museum (and gift shop) in Pepin itself for those who want more information, or souvenirs. I didn’t feel the need.

* The thrill is pretty much all I remember about that visit. I haven’t been back since. Though I’m adding it to the list of things the next time I’m home when it’s open.

**I use the verb “wrote” with caution. There is a reason why the museum in Mansfield is now called the Laura Ingalls Wilder – Rose Wilder Lane Museum. Recent scholarship has demonstrated that Wilder’s daughter was deeply involved in the creation of the books. And yet, for me, as for many of my contemporaries, the Little House books are fundamentally Laura’s. Sometimes the fan wins out over the historian.

***I was further surprised to learn after we got home that driving the Laura Ingalls Wilder sites is a popular road trip for hard-core fans.