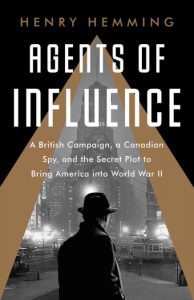 In June 1940, American politics was divided into isolationists, who wanted to keep America out of the European war, and interventionists, who believed that America’s safety and prosperity depended on supporting Great Britain in its fight against Nazi Germany. In Agents of Influence: A British Campaign, a Canadian Spy, and the Secret Plot to Bring America into World War II, Henry Hemming, author of other real-life spy stories such as Agent M and The Ingenious Mr. Pike, tells the story of how Britain and Germany attempted to influence American politics from behind the scenes.

Hemming’s account of this shadow duel is remarkably even-handed, even when Hemming’ grandparents make a cameo appearance on behalf of Stephenson’s organization. No one had clean hands.

This review previously appeared in Shelf Awareness for Readers.