Some museums are the road trip equivalent of a destination wedding: you plan the trip for the purpose of visiting that museum. Some museums are must-sees. (Though I must admit that we’ve missed a few of those on previous Great River Road adventures because of scheduling difficulties. *Sigh*) And others are a fun stop when they fall in your path. The National Brewery Museum in Potosi, Wisconsin, was in the last category.* 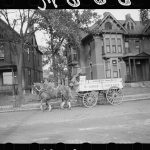 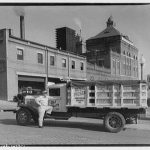 Here were some of my takeaways:

The museum used the history of thePotosi Brewing Company, which originally operated between 1852 and 1972, to tell two related stories: the effect of Prohibition on small breweries and the transformation of the American brewing industry from hundreds of local breweries to big national companies. The Potosi Brewing Company survived Prohibition, and the Great Depression, thanks to some smart choices about how to diversify. They were not so lucky when it came to the move away from local breweries.

Transportation was as much a part of the story as the beer itself, from horse-drawn carts to the interstate (As an aside, the Potosi Brewing Company was the only brewery in the country that owned its own steamboat, which they used to deliver beer to Dubuque. They also had room for 100 passengers and would take people on river outings, presumably with beer.)

An hysterical video about the use of cowboys in beer commercials, including one with John Wayne. As far as I was concerned, it was almost worth the stop all by itself. I watched it twice and was tempted to watch it a third time. (I tried to find an on-line clip to share, with no luck Instead I offer you this one, which is also pretty funny:

(REMINDER: If you’re reading this via email you may have to move to your browser to see the clip.)

Some unexpected history of brewers and WWII:

Definitely worth the stop.

* If you’re seriously interested in the ephemera of brewery advertising, you should move the museum higher up on your personal list.

Travelers’ tip: The National Brewing Museum is sponsored in part by the revived Potosi Brewing Company, which has a brew pup at the museum. Your museum ticket includes a pint of beer. The food is good, the beer is better. And the root beer is amazing.