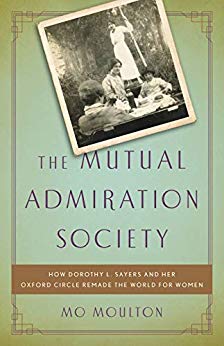 I am a long-time fan of Dorothy Sayers’ mystery novels. With the exception of The Nine Tailors,* I’ve read all of them many times. I would go so far as to say that her picture of educated women’s lives helped shape my image of the life I wanted.

I was thrilled when I got a chance to review The Mutual Admiration Society: How Dorothy L Sayers and Her Oxford Circle Remade the World For Women by historian Mo Moulton. I hoped it would give me a behind-the-scenes picture of how some of my favorite books were written. I was not disappointed. Moulton’s insights into the relationship between Sayers’ life and the books enriched my understanding of both and inspired me to re-read those novels once again. ** (I may even give The Nine Tailors another shot.) But the Mutual Admiration Society is a book about more than Sayers and her times.

In 1912, four extraordinary women met as students at Somerville College, one of the first women’s colleges at Oxford: mystery novelist and theologian Dorothy Sayers, historian Muriel St. Clare Byrne, child-rearing expert and birth control advocate Charis Barnett Frankenburg, and Dorothy Rowe, who founded an important amateur theater company. Together they formed the heart of what Sayers dubbed the Mutual Admiration Society (MAS), a not entirely accurate description of a group devoted to honest criticism and high intellectual and artistic standards.

Moulton (who identifies with the pronoun they) examines the lives and the changing relationships of the members of MAS from their college years to the death of the last surviving member in 1988. They consider the nature of female friendships. They explore the women’s lives as both insiders and outsiders—who benefited from their position as members of the social elite and yet found their choices limited by legal and social barriers based on gender. (Even at Oxford Sayers and her comrades were second-class citizens: able to take classes and sit for examinations but not eligible to receive degrees.) More importantly, they look at the ways in which each of the four pushed against those boundaries and created new versions of women’s lives in a changing world.

The result is not only a picture of four complex lives across a diversity of experience, but a rich discussion of what it means to be both human and female.

**The suggestion that Sayers created Lord Peter not as an idealized suitor for her alter-ego, Harriet Vane, but as an idealized vision of the life she wanted blew me away–and felt so very. right.

As you may have guessed, a version of this review previously appeared in Shelf Awareness for Readers.