Sunny Stalter-Pace says she likes to write about women making a scene!

The Hargis Associate Professor of American Literature, she received her PhD from Rutgers University and her BA from Loyola University Chicago. She specializes in the interdisciplinary study of modernist performance, literature, and urban space. Her first book, Underground Movements: Modern Culture on the New York City Subway was published by the University of Massachusetts Press in 2013. Her current book is forthcoming in May 2020 from Northwestern University Press. Titled Imitation Artist: Gertrude Hoffmann’s Life in Vaudeville and Dance, this critical biography considers how a vaudeville performer and producer transmitted European culture to American mass audiences.

Take it away, Sunny! 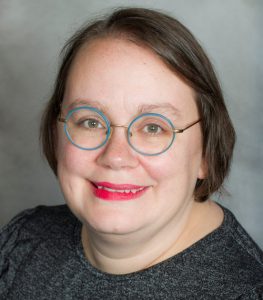 How did you get interested in Gertrude Hoffman?
I was looking for plays set on subway cars, and I found her. My first book, a revised version of my dissertation, was about modern literature related to the New York City subway. I thought my second book was going to go into more depth on that topic, specifically looking at drama with a subway setting. I was poking around on the New York Public Library digital collections site (as one does). I think my search term was “subway express.” And I found a theater program for a vaudeville revue with a tango dance at the entrance to a subway station. I was intrigued, so I googled the dancer’s name. Once I found out that she had produced a knockoff version of the Ballets Russes and toured the U.S. with it before the original dancers came over from Paris, I was hooked. Some feminist historians and performance studies scholars had written about different parts of her life. But she’s so representative of the culture of imitation in early twentieth-century American performance, and just this gutsy, self-made woman. I wanted to tell her whole story.

You straddle many disciplines in your academic work. Do you consider yourself a historian, or something else?
I’m an American literature professor, with some background in urban studies and performance studies. My intellectual home base is the Modernist Studies Association, which covers all kinds of art, writing, and culture from the late nineteenth century to the mid-twentieth. My background helped me understand Gertrude Hoffmann a little better than someone might who was firmly rooted in a particular discipline. Hoffmann’s work cut across categories of performance: she did comic imitations and serious dances in the same vaudeville act.  She once wrote a letter to Lucille Ball saying she did “a bit of everything.” I feel the same way.

What was the most surprising thing you’ve found doing historical research for your work?
That letter to Lucille Ball was definitely one of the most surprising artifacts. She was trying to convince Lucy to play her in a bio-pic. It’s a draft letter in the Wake Forest papers; the second page is written in pencil on a paper napkin. It’s fragile and poignant. I don’t know if she ever sent a version of the letter, but it told me so much about how Hoffmann was thinking about her career later in her life. Another surprising things had to do with child care. Gertrude and Max Hoffmann had a son, Max Jr., very early in Gertrude’s career as a performer. Once, when her mother was babysitting over the summer, Max Jr. stole a buggy and tried to get to the beach to “give the horse a chance to get his feet wet”! The horse and kid were recovered without further incident.

A question from Sunny for Pamela: What’s the best place to visit in Chicago in order to better understand women’s history in that city?
The Women and Leadership Archives at your alma mater, Loyola University. They have excellent on-line exhibits and are becoming an important repository for the papers of women who played a role in the city’s history, with a special emphasis on women and activism. 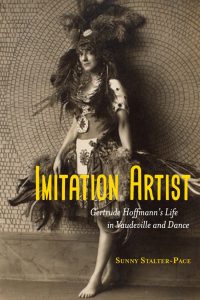 Want to know more about Sunny Stalter-Pace and her work?

Come back tomorrow for three questions and an answer with novelist Kip Wilson, author of a novel in verse about Sophie Scholl and the White Rose resistance movement in World War II.