Dr. Kimberly B. Sherman is a member of the next wave of women’s historians. She is a historian, writer, and educator living in Wilmington, NC. She received her Ph.D. in Modern History from the University of St. Andrews. Her current book project is titled Intimate Worlds: Scottish families in early North Carolina and the Atlantic World.

You heard about her here first, folks. Take it away, Kimberly! 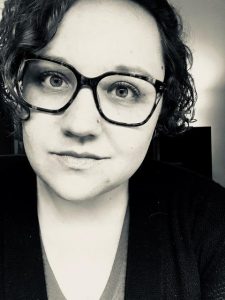 When did you first become interested in women’s history?  What sparked that interest?
I think a lot of my interest in women’s history came right from my family. I’ve always said that spending time in my grandmother’s kitchen when I was little inspired my trajectory toward the field of history. She’d tell me stories about growing up in southeastern North Carolina as we made biscuits or cornbread together. Later on, when I actually got into studying history at university, I shied away from women’s history because I had been brainwashed with the idea that women were expected to do women’s history — so I resisted. In the end, I realized how distorted that mentality was and I fell headfirst into loving the field.

[Pamela butting in here: This statement tells me how far we have come in the last forty years: “ I had been brainwashed with the idea that women were expected to do women’s history.” I was blown away when I read that sentence. When I first began studying history, women’s history was brand new and controversial. Not only were women expected to do women’s history, but women were often warned away from it on the grounds that it might damage their careers. (I know of one woman whose dissertation committee asked “Isn’t that a little–soft?” when presented with her proposed topic.*)  We have made more progress than we sometimes realize. Carry on.]

What do you find most challenging or most exciting about researching historical women?
One of the most challenging aspects is often the lack of sources written directly by women, especially from the eighteenth century and previous. So many women did not have the privilege of literacy or their personal documents have not been preserved in the same manner as the “great men” of history. So I guess that would be the silences of the archives and the challenge of sometimes having to read between the lines. At the same time, it can be incredibly thrilling when you find something you don’t expect!

What was the most surprising thing you’ve found doing historical research for your work?
Last summer I was conducting research as a fellow at the Winterthur Museum and Library in Delaware for a new project. After I had exhausted most of the collections I was interested in, I called up a volume that looked like it might be loosely related to my research on Scottish families in revolutionary North Carolina. It turned out to be a cyphering book (or mathematics exercise book) kept by a teenage girl from northeastern North Carolina in 1776. Every page of exercises was embellished with elaborate doodles and penmanship revealing a very political stance in support of revolution. It is a breathtaking volume and I can’t wait to uncover more about this young woman and her community!

And a question from Kimberly for Pamela: What do you think is the most under-researched topic or era in women’s history? What needs to be done?

The real answer is all of it! But if I have to chose: the most under researched topics are those related to women of color and non-elite women. I tiptoed into this area in Women Warriors because I wanted my global history to be truly global. It is challenging because even fewer traditional sources are available. But people are producing some exciting work in this field. Two recent examples I ‘m eager to get my hands on are A Black Women’s History of the United States by Daina Ramey Berry and Kali Nicole Gross and Rebel Cinderella: From Rags to Riches to Radical, the Epic Journey of Rose Pastor Stokes by Adam Hochschild. Exciting stuff!

Want to know more about Kimberly Sherman? Her writing may be found at www.kimberlybsherman.com .

*Feel free to growl, curse, or throw something.

Come back tomorrow for three questions and an answer with attorney turned biographer Marlene Trestman.