As is the case with so many of my friends in Women’s History World, I met Leah Leach of Gal’s Guide to the Galaxy on Twitter. (Don’t let anyone tell you social media has no value.)

Gal’s Guide to the Galaxy is an in-the-trenches grassroots organization dedicated to spreading the word about women’s history. Here’s the official statement:

Gal’s Guide is a 501(c)3 nonprofit that provides multimedia resources and education about amazing women of history.

Gal’s Guide mission is to build an independent women’s history library and research center in the United States to preserve, collect, share and champion women’s achievements and lessons learned. We will act as a catalyst to creators who utilize our resources to guide others to these amazing role models who have been waiting in the shadows of history for too long.

All of which is true. But it doesn’t begin to describe the attitude, sparkle, and sheer grit that Leah and her team bring to the endeavor.

As you will see in the interview below, when I started talking to Leah about this back in January, the organization’s goal was to raise enough money to fund a pop-up library during Women’s History Month. Since then, Gal’s Guide has raised enough money to fund the library for a year. With the help of a thirteen-member volunteer book brigade they moved more than 1300 books that had been stored in Leah’s house to their new location in Noblesville, Indiana. They opened their doors on March 6. Personally, I’m hoping to make a pilgrimage.

Now I’ll let Leah tell you her story. Take it away Leah! 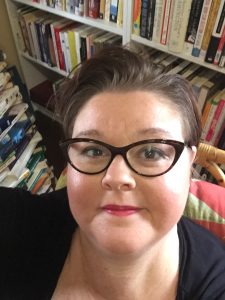 The Gal’s Guide to the Galaxy has a lot of cool parts:  podcasts, education elements, events, etc.  But the one that caught my imagination is your biggest goal: building a woman’s history library and research center.  What inspired you to start this project?  And how are you going about it?

My inspiration for the library came from the research that I was doing for the Gal’s Guide podcast called Your Gal Friday. It was our 44th episode and we were covering the bullfighter Conchita Cintrón and I was struggling to find out not only information about her but the handful of books written about her were out of print and out of circulation. This wasn’t the first (or the last time) I was frustrated with access to information but it was the first time I asked so who is making sure these out of print books are being preserved somewhere? Who is watching out for women’s history?

Because of my years since founding Gal’s Guide, I was already aware of how little women’s history was known to most Americans. I thought a podcast would be a lovely way to showcase history in an easily digestible way, but what happens when we (as creators of content) run out of credible sources? What happens when we keep hitting dead ends?

How we are going about getting the library built is first we are collecting materials. In our first year, we bought 818 books and we had another 552 donated thanks to wonderful organizations and people who support our mission. We also were able to add the Conchita Cintron book to our collection. (I attached a picture). 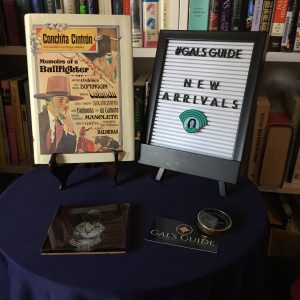 Our goal is to add at least 1,000 books to the collection each year. Our next step, now that there are 1,300+ books sitting in my living room, is to find a public location. We are asking various cities for in-kind spaces. We are applying for grants. We are partnering with various organizations and businesses likes Barnes & Noble. We have started a fundraiser to raise money for a pop-up location during Women’s History Month.

We are looking for a small but mighty space and then growing from there. The Glasgow Women’s Library did the same thing moving from space to space until there was enough capital to build their own space. Once we get the Gal’s Guide Library & Research Center in our first location we’ll set our sites on building an online women’s history database.

How can people help if they want to support the library project?

To support the library there are 3 wonderful ways to get involved and make a difference.

#1 Volunteer your time. We are a 100% volunteer staff, no one at Gal’s Guide is getting paid. We have a variety of people with special skills to help our mission plus you don’t even need to be local. Here is the link to what special skills we are looking for. https://galsguide.org/2019/12/11/volunteer-at-gals-guide/

#2 Donate Funds. We’ve been doing a lot with a little bit of money but it’s not free to build a library. It will take money. We are a 501(c)3 so in many ways, your donation is tax-deductible. We have a donation button on our website and a Patreon page for monthly donations. We are also a charity listed and supported on Facebook, Amazon Smile and Kroger. Learn more ways to donate at  https://galsguide.org/supporters/

#3 Donate Books. We are seeking books that are written by women or about women. We accept fiction, nonfiction, cookbooks, children’s books, magazines, newspapers, DVD’s, CD’s. If it’s about women we want to preserve it and share it with our patrons. We very much love recycling books and giving them a new home. Info on where you can send your book donations:  https://galsguide.org/womens-history-library/

This is a really hard question because there are so many! Personally I want to say Sister Rosetta Tharpe because I think she’s amazing and needs WAY more credit as the inventor of Rock n’ Roll.

However, because I go into schools and visit organizations giving presentations about women of history this particular gal really captures the imagination of so many…Hedy Lamarr. I think Hedy’s story should be in every high school history textbook. Hedy was an actress and was sold as “The most beautiful woman in the world” what the world didn’t know until decades later is that Hedy was the co-inventor of Frequency Hopping, a patent that would make wifi and cordless technology like cell phones, GPS, and BlueTooth possible. When she gave this tech to the United States Army they didn’t understand it, they told her she was too pretty for inventing things and she should go sell war bonds. So she did, millions of dollars worth.

But now there isn’t a day that goes by that we don’t use her invention. Her story is a warning cry that we need to encourage people to value brains over beauty. Also, she said this to her children near the end of her life:

“People are unreasonable, illogical and so obsessive
Love them anyway.
If you do good people will accuse you of selfish ulterior motives
Do good anyway.
The biggest people with the biggest ideas can be shot down by the smallest people with the smallest minds
Think big anyway.
What you spent years building maybe destroyed overnight
Build anyway.
Give the world the best you have and you’ll be kicked into the sea
Give the world the best you’ve got anyway.”

My question to you lovely Pamela, if you had a time machine and could travel to any time and place in history, where would you go and what would you hope to learn or see?

That’s a no-brainer for me: I’d go to 1920, so I could celebrate the passage of the 19th Amendment. And I’d like to stay long enough for the first national election in which women could vote. Can you imagine how thrilling that would be? (Of course, as a time traveler I probably couldn’t vote. But I could be there!) 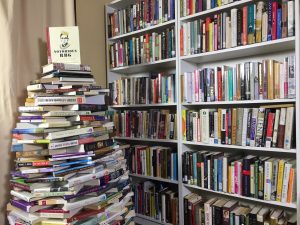 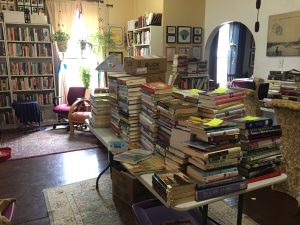 Come back on Monday for three questions and an answer with the women behind the Twitter feed @OnThisDayShe, which provides bite-sized bits of women’s history.