You’re going to see a lot of book reviews here in the coming weeks, because I’m doing a lot of reading and I love to share books that I think the Marginalia will enjoy.* I will do my best to mix it up.

Next up, a gripping and occasionally heartbreaking account of American reform movements in the early twentieth century, told through one woman’s story: Rebel Cinderella: From Rags to Riches to Radical, the Epic Journey of Rose Pastor Stokes, by Adam Hochschild . (An author whose work I love.) 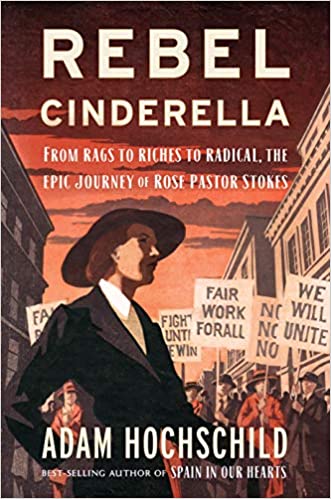 In 1905, an unlikely marriage made headlines around the world. Rose Pastor was a young Jewish woman whose family had fled Russia when she was a child. She began working in cigar factories at the age of eleven to support her family and turned a talent for language into a career as a journalist for a Yiddish-langue newspaper. James Graham Phelps Stokes (commonly known as Graham) was the Ivy-league educated oldest son of one of “the Four Hundred”—the families that dominated New York Society in the Gilded Age.

Hochschild tells the story of their marriage within the broader history of the American socialist and labor movements in the first half of the twentieth century. (He also provides a comic counterpoint to their story in the form of Stoke’s Uncle Will: an unpredictable and litigious New York real estate mogul who was an ugly version of the sprightly uncles in P.G. Wodehouse novels, complete with mustache.)

Pastor and Stokes met at a time when patrician reformers were not uncommon. She was assigned to interview him at University Settlement, a settlement house that served Italian and Jewish immigrants on New York’s Lower East Side. Stokes was not only on the settlement house board, he was one of a number of wealthy, young volunteers who lived on the settlement’s top two floors.

For a time they were the golden couple of progressive thought in America. Their home was a salon for visionaries of all types. But there were pressures on their marriage from the beginning. Graham’s family was never comfortable with Rose’s politics. And Rose was never entirely comfortable with the advantages and opportunities that his privilege afforded her, even though that privilege made it possible for her to become a prominent figure in the socialist and labor movements.

Their approaches to reform diverged as Rose became a rising star in radical circles. World War I and the Russian Revolution drove them further apart. Like many socialists, Graham discovered national patriotism mattered to him more than international brotherhood. Rose remained passionately socialist.

In the end, the immigrant Cinderella and her American prince found their differences too great to overcome. They divorced in 1926 and returned to their natural social habitats, at roughly the same time socialism lost its momentum as a mass movement in the United States.