If you’ve been hanging out here in the Margin’s for a while, you may have noticed a pattern to histories about women’s contributions in times of war. Groundbreaking women kick their way through a closed door against the military and society’s objections. After they prove their worth, the military opens its arms in invitation, and women answer the call. And once the war is open, the doors slam shut again—or at least most of the way shut—and in a remarkably short time almost no one remembers what the women did.

The story Wendy Moore tells in No Man’s Land: The Trailblazing Women Who Ran Britain’s Most Extraordinary Military Hospital during World War I is no exception to that pattern. 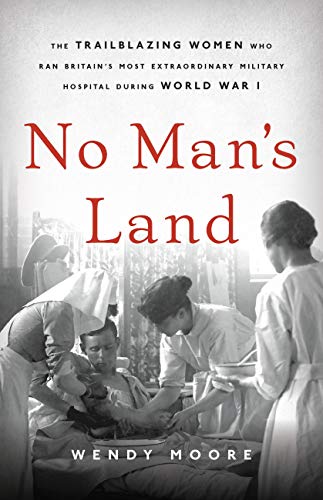 No Man’s Land is the fascinating account of how two women overcame the social boundaries of their times to create an exemplary military hospital—and how those boundaries slammed back into place for the women who worked there when the war ended.

Prior to the war, women doctors were limited to treating women and children. When doctors and suffragettes Flora Murray and Louisa Garrett Anderson offered their services to the British army, they were rejected immediately. Undeterred, the two women opened, supplied and staffed military hospitals with the support of the French Red Cross, first in Paris and later in Boulogne. Their largely female staff treated hundreds of soldiers wounded in the French battlefields.

Murray and Garrett were so successful that the British Army asked them to establish a hospital in London after they returned to England. They gathered women from across the English-speaking world to work as doctors, nurses, and orderlies.* The 500-bed all-female “Suffragette Hospital” treated more than 26,000 patients over the course of four and a half years. It became a model of military medicine, known for the brilliance of its surgeons, its pioneering medical techniques, and its understanding that patient morale was as important as medicine.

When the war ended, the doctors and staff of the “Suffragette Hospital” discovered that proving they could not only do the job but do it brilliantly was not enough. Like all the other women who had taken on “men’s jobs” in the war, they were expected to step aside in favor of soldiers returning from war. Female doctors were expected to go back to working in hospitals run by women for women and children. The hospitals that had depended on female doctors during the war replaced them with returning men without apology. Medical schools that had welcomed women students in the war now refused to accept them on the grounds that male students preferred to study in all-male classrooms.**

No Man’s Land is a story of feminist aspirations, bureaucratic hurdles overcome, medical innovation, and unexpected freedoms created in the turbulence of war. It is an important and well-written addition to the growing body of forgotten women’s history.

*American philanthropist and suffragist Dora Sedgewick Hazard recruited twenty elite women from upstate New York to work as orderlies. When they arrived at the London hospital, they were met with a huge Stars and Stripes in the courtyard and the hospital choir singing “The Star-Spangled Banner.” Nicknamed “the Hazard Unit,” they were the only all-female American unit to serve in the war.

**In one case, male students signed a petition saying they didn’t want female students in the school because it would jeopardize the school’s rugby record. Can you say GRRRRR?

The heart of this review previously appeared in Shelf Awareness for Readers.

Posted in Military History, Reviews, Shin-Kickers From History, Women, World War I and tagged shin-kickers from history, women in war, women in world war I