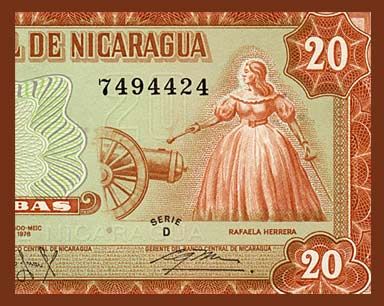 In my experience, once a subject has grabbed me by the throat and said “Pay attention to me, dang it!” it never really goes away. I continue to stumble over new stories related to the topic, or at least interesting bits long after I’ve written a blog post or article or book on the idea. That seems to be particularly true in the case of women warriors, and rightly so. My major point in the book is that women have always fought, despite the fact that we have generally forgotten their stories. Of course there are more stories to be told. And I am happy to tell them.(1)

Which brings me to Rafaela Herrera, the national heroine of Nicaragua.(2)

The Anglo-Spanish War of 1762-1763 was a tiny part of the Seven Years’ War (1757-1763), a global campaign in which Britain and France duked it out for world dominance over four continents. The British and French conflicts in Europe were fought in parallel wars in the Indian Subcontinent and North America. (Do the French and Indian Wars ring any bells?) Worried by French losses and the possible threat to their colonies of a British victory, Spain finally entered the war on the side of France in 1762. The main focus of conflict between Britain and Spain was Portugal, but war spilled over into Latin American and the Caribbean.

In the case of Nicaragua, the spilling occurred when William Lyttelton, the British governor of Jamaica, sent an expedition against the Spanish colony in early 1762: reportedly fifty some boats (size unknown) and 2000 men. With the objective of capturing the town of Granada and thereby effectively cutting Spanish America in half, the British expedition sailed up the San Jose River, destroying villages, cocoa plantations, and a Catholic mission as they went. On July 26, they laid siege to the strategically important Fortress of the Immaculate Conception.

The fortress was defended by only a hundred soldiers. (4) To make matters worse, the fortress’s commander had died eleven days before the British fleet arrived–a fact the British learned when they captured a nearby observation post. The British commander, no doubt thinking the fortress would fall like [fill in the cliche of your choice], sent an envoy demanding immediate surrender in exchange for an immediate cessation of hostilities. The lieutenant who had inherited command of the fortress was prepared to surrender. Rafaela Herrera, the nineteen-year-old daughter of the dead commander, refused to let the the fortress go without a fight.

At this point in the story, I suspect there is a certain amount of fiction mixed in with the fact. Without access to a library, I’m just going to give it to you as it appears in the sources available to me. (5) (Neither of my Big Fat History Books about the Seven Years’ War include a single mention of Nicaragua. And dang little on Spain.)

Rafaela was a fourth generation military brat and her father’s only child. (6) She was raised by her father, an artillery captain who taught her to fire a cannon.(7) Or perhaps to manage an artillery team. (The sources I’m working with are a bit vague on this point.) Either way, Rafaela commanded the cannons during the fortress’s defense. (The British commander died on the third volley of cannon fire. ) That evening, she instructed the troops to create makeshift rafts and load them with alcohol-soaked sheets and rags, which they then set on fire and floated down the river toward the British fleet. The British were forced to retreat for the night, giving the garrison of the besieged fortress time to catch its collective breath.

The siege continued for six days (or maybe nine, depending on who you believe) before the British withdrew and made a nuisance of themselves by blockading the mouth of the San Juan River.

Herrera received a pension for life from King Charles III of Spain for her heroic actions at the Battle for the Rio San Juan de Nicaragua. Today she is considered national hero in Nicaragua. Her actions are commemorated on the 20 cordoba Nicaraguan bank note, which is a step up from the postage stamps with which many countries honor women warriors.(8)

1) Which does not mean there will be a sequel to Women Warriors.

2) It feels like I have been sitting on her story for a long time, but in fact I was introduced to Rafaela at a speaking gig about women warriors in the Twin Cities in March, just a few days before all the book gigs stopped. (3)

3) If you live in the Twin Cities, I strongly urge you to put Global Minnesota on your list of organizations putting on interesting events.  It’s an impressive outfit.

4)This may be historical shorthand for “seriously outnumbered” rather than an actual count. Especially if the British numbers are inflated, as I suspect they are.

5) Minus the stirring speech Rafaela reportedly made to rouse the troops, which I strongly suspect is made up.  Though that does raise the question of how she got anyone to listen to her.

6) It is all too easy to leave mothers out of these stories. In part because we often don’t know much. Rafaela’s mother was Felipa Torreynosa, who was reportedly criolla or mulatta, was not married to Lieutenant Colonel Herrera, and died shortly after she was born.

7)The tomboy whose father teaches her military skills is a recurring theme in the stories of women warriors. While there is no doubt that this did occur on occasion (and I’d like to think that this is one of them), it is also a way of making an woman warrior an exception in her time. Those of you who have read the book or heard me speak know this is a problem.

8) And speaking of women on currency, how much longer are we going to have to wait for Harriet Tubman to appear on the twenty-dollar bill?