Several years ago, I read Steven Johnson’s The Ghost Map: The Story of London’s Most Terrifying Epidemic—And How It Changed Science, Cities, and the Modern World. I never reviewed it here on the Margins, though a large sticky note on the inside cover listing a number of thought-provoking questions suggests that I intended to.*

As far as I was concerned, it was kick-in-the-head brilliant. So when Johnson’s most recent book, Enemy of All Mankind: A True Story of Piracy, Power and History’s First Global Manhunt, appeared on a list for review for Shelf Awareness for Readers, I raised my hand and said “Pick me! Pick me!” 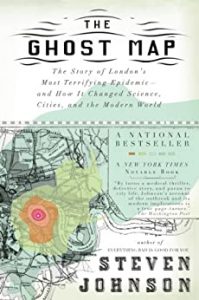 I’ve got to say that while Enemy of All Mankind is an excellent book, it did not blow me away the way The Ghost Map did. In all fairness to Johnson, that may be because I know a fair amount about a number of topics he deals with. Someone less familiar with the Sea People,** the Mughal empire, the Indian Ocean trade, and the British East India Company might well enjoy the same sense of jaw-dropping revelation that I felt reading The Ghost Map.

Nonetheless, Enemy of All Mankind*** is well-worth the read. Johnson makes a compelling case that a single (admittedly brutal) attack on an Indian treasure ship by seventeenth century British pirate Henry Every played a critical role in shaping the global economy.

The story at the heart of the book could be the basis for a thriller: Henry Every leads a mutiny on a British trading ship. Once captured, he and his fellow mutineers turn pirate and sail to the Gulf of Aden where Indian ships carrying Muslim pilgrims to and from the hajj to Mecca present fat targets. The pirates attack and seize a rich ship (which may or may not have had a Mughal princess as a passenger) and subsequently become the objects of a global manhunt. And though his crew is captured and hung, Every is never found.

As he did in The Ghost Map, Johnson uses his core story as a springboard for discussing bigger issues. He outlines the history of piracy, beginning in ancient Egypt, and explains why pirates caught the public imagination in seventeenth century Britain. **** He traces the rise of the Mughal Empire in India, succession struggles within the Mughal dynasty, the lives of women in the Mughal court, and the economics of the hajj pilgrimage. He explains the economic base of the British East India Company, it’s shaky position in seventeenth century India, and the changing treatment of pirates in the British court system. Finally, Johnson pulls all his threads together in a rigged courtroom scene in which not only Every’s crews but Britain’s international reputation were on trial.

Johnson ends Enemy of All Mankind ends with an open-ended discussion of what might have happened to Every. A satisfying conclusion to a story with as many questions as answers.

*Not now, however. I’ve read enough about epidemics in recent weeks and my guess is that you have, too. Maybe I’ll circle back to it in happier times.

**A topic that has been on my future blog post list for several years. Perhaps its day has come.

***A legal term that referred to pirates because their crimes typically occurred outside the jurisdiction of any given state. Since then it has been applied to other types of criminals, including slave traders, professional assassins and war criminals.

**** Hint: The new invention of the popular press created a mass audience and then need to amuse it. In the absence of other nationally known figures, pirates were the pop stars of the period.