Earlier this week, a news item about the discovery of an ancient woman warrior appeared in my news feed.* Here’s the link if you’re interested: https://bit.ly/2N25WHJ.

The story will sound familiar to anyone who’s been paying attention to this kind of thing in recent years:

Russian archaeologists discovered the remains in what is now Siberia in 1988. Dated from the early 6th century BCE, they were so well-preserved that is was possible to see the wart on the young warrior’s face. (And by young, I mean twelve or thirteen years old.  Which probably didn’t seem as young to the ancient Scythians as it does to us.) But partial mummification had not preserved what are politely described as “secondary sexual characteristics”. Since the warrior was buried with a full array of weapons—an axe, a three-foot-long birch bow and a quiver full of arrows—the archaeologists deemed the remains to be male. Because thirty years ago, weapons were also considered a secondary sexual characteristic.

Recently, the archaeologists were given the opportunity have the remains subjected to paleogenetic analysis, what you and I know as DNA testing, which revealed the young warrior to be a girl. Holy Birka Woman, Batman!

This re-thinking of an existing discovery is not an isolated case in the three years since since discovery that the Birka man was, in fact, the Birka woman. Scholars are beginning to ask more complicated questions about gender and remains. And as a result, there have been several new discoveries as a result of using techniques of forensic anthropology to consider what we know about existing remains. (Here are a couple of links to stories that appeared in my feed in recent months: https://bit.ly/2KD7OFM and https://bit.ly/3eV8kN2)

I suspect that in coming years we are going to see more instances of possible women warriors as these technologies and new questions are applied to new discoveries and existing remains. At a minimum, we can no longer assume that sword means male, because that would be a phallus-y.**

*Google alerts are a wonderful thing.

**Sorry, but I’ve wanted to use that pun for at least two years now. Just  groan and move on. 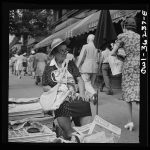 Today’s news from 1928: Members of the League of Nations council were so distracted by women staff members who attended a session without stockings (a new and apparently shocking fashion) that they stopped working on an anti-war pact to pass a rule forbidding it.