One of the major challenges historians face when writing about the lives of non-elite women of the past is the absence of sources. Sources written by men that describe their lives are rare. Those written by the women themselves are rarer yet. 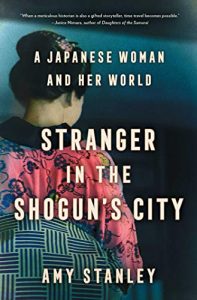 Stranger in the Shogun’s City: A Japanese Woman and Her World, by historian Amy Stanley, demonstrates how rich history can be when such sources are available.

The project began when Stanley became fascinated with a family archive that included dozens of letters written in early nineteenth century Japan.by a rebellious woman named Tsuneno and the letters (and legal documents) created by her family in response. Together, these letters created a rare picture of the life an unconventional, non-elite woman, written in her own words.

Born in 1804 in a rural village, Tsuneno was the daughter of a Buddhist priest. She tried to settle into the traditional (and relatively privileged) life that her family expected of her, but it didn’t take. After three divorces and faced with another arranged marriage, she ran away to Edo (now Tokyo), then one of the largest cities of the world. Her life in Edo was always hard and often scandalous by the standards of her family and society. She made horrible decisions. She moved from tenement to tenement, took menial jobs that didn’t pay enough to support her, and married, divorced, and re-married a violent man from her home region. Her life can be summed up in a single line from one of her letters: “I ended up in so much trouble.”

Stanley places Tsuneno firmly in her historical context, creating a multi-layered picture of life in Japan in the decades before it was forcibly “opened” to the West by Commodore Perry’s fleet in 1854. Stranger in the Shogun’s City is a vivid and often lyrical portrait not only of Tsuneno, but of Edo, the city she loved.

Most of this review previously appeared in Shelf Awareness for Readers