One of the delights of writing this blog is correspondence with like-minded people who have questions or thoughts about my posts. It is always a treat.

In response to my last post, a reader with whom I often correspond asked a question I had never even considered: If Jewish American or Jewish British or Jewish French soldiers were captured by the Germans, were they sent to a concentration camp for extermination or to a regular POW camp? *

I did a quick check through my usual sources. Nothing. I asked My Own True Love if he had knew.** He didn’t—though he agreed that it was a great question. Finally, I turned to a source that hasn’t failed me yet: the reference librarians at the Pritzker Military Library.*** They had an answer for me in an hour and a half.

Soldiers identified as Jewish, or even potentially Jewish, were separated from other America prisoners and sent to the slave labor camp at Berga, which had the highest death rate of any of the POW camps, or to the extermination camps.

More information is available in a book titled Forgotten Victims: The Abandonment of Americans in Hitler’s Camps.  I haven’t read it, but it has good reviews. 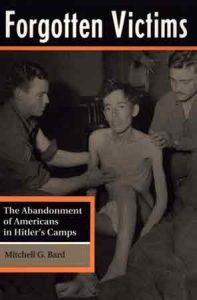 Thanks to Dr. Gene for a great question. And to Pritzker librarian Leah Cohen for the sobering answer.

*You people are smart!

**He knows a lot more about World War II than I do. Or at least different things.

***If you are interested in military history, you should be aware of the Pritzker. They have interesting exhibits (the current exhibits are on women’s service organizations in WWII and WWI posters-both subjects dear to my heart), a solid research collection, an enormous collection of war posters, and kick-ass reference librarians. They collect veteran’s stories in an oral history program, Stories of Service. They also host excellent speakers. Even before the current troubles, they streamed many of their programs live.  I have spent many a happy evening in front of my computer with my knitting and a notebook, listening to experts talk about their passions.