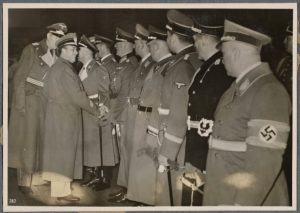 I recently struggled to explain the Allies and the Axis Powers in War II in a sidebar for a book aimed at 8 to 12 year olds.* It was harder than you might think. Even just listing who belonged in each group was tricky, because in some ways World War II was a collection of smaller wars mashed together into one big war. Who was on what side when changed. (The Soviet Union being the most astonishing example of this.) I think I succeeded. I hope my editor agrees.

In the process, I stumbled across the answer to a question I’ve had for a long time: why do we call German, Italy and Japan the Axis powers?** (This may not be news to anyone but me.)

In October, 1936, Germany and Italy signed the first of several treaties that would create the alliance between the three powers. On November 1, Benito Mussolini declared that from now on, Europe would revolve around the axis between Rome and Berlin.

And for at least a while it was true.

* One of the challenges of writing history for the general intelligent audience (that would be you, right?) is that occasionally you are required to explain something very complicated in very few words. Why uranium is radioactive, for example.

** A related question from an earlier blog post: How did Germany become the Hun?