Long before women’s history became a thing, two types of women held a place in the public imagination: queens (or more accurately, princesses) and witches. In Royal Witches: Witchcraft and the Nobility in Fifteenth Century England, historian Gemma Hollman considers a point at which two subjects of women’s history intersect—the political roles played by royal women in medieval and early modern Europe and witch trials. The result is a fascinating story of the power and vulnerability of those royal women. 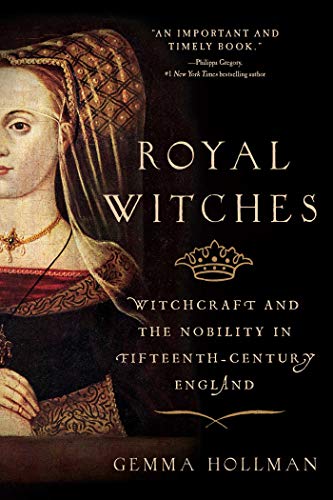 Hollman explores the lives of four women who married into England’s royal family in the turbulent period between Henry IV’s usurpation of the British throne through the Wars of the Roses:* Joan of Navarre, Eleanor Cobham, Jacquetta of Luxembourg (later Jacquetta Woodville), and Elizabeth Woodville. She tells the story of each woman’s marriage. (Unusual among European nobility at the time, all four marriages were love matches.) She establishes the political context of those marriages. And then she demonstrates how accusations of witchcraft were used to attack each woman, and in two cases her husband’s political position as well.

Hollman does an excellent job of demonstrating how accusations of witchcraft lead to the falls of Joan, Eleanor, and Jacquetta and how those accusations, and each woman’s defense, relate to each other. The final section of the book, which deals with the better-known history of Elizabeth Woodville’s life as Edward IV’s wife and the tragic dissolution of her family after his death, is well told, but less clearly linked to Hollman’s central argument. Despite this unevenness, Royal Witches is an intriguing addition to the growing genre of books dealing with royal women in medieval Europe.

*If you want to look at women of this period from a slightly different perspective, I also recommend Sarah Gristwood’s Blood Sisters. Both books are part of a growing genre of books that look at royal and noble women of medieval and early modern Europe within the context of power politics and family networks. If you want to read my general thoughts on this genre (and the broader question of why we write group biographies of women), you can find them in this recent issue of my newsletter. **

If you simply want to read more books about queens, etc, here are links to some I’ve reviewed over the last few years:

Nancy Goldstone. The Rival Queens: Catherine de’Medici, Her Daughter Marguerite de Valois, and the Betrayal That Ignited a Kingdom

Sharan Newman. Defending The City of God: A Medieval Queen, The First Crusade And The Quest for Peace In Jerusalem

Not to mention Antonia Fraser’s The Warrior Queens: The Legends and the Lives of the Women Who Have Led Their Nations in War, which appeared much earlier and holds a special place in my heart for obvious reasons.

I am sorry to report that I have not reviewed any books about witches. Hmmm..