This post first ran on election day in 2008.  My feelings on the subject haven’t changed: 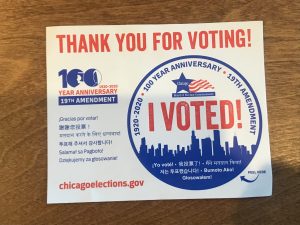 It’s election day in Chicago.  I just walked home from voting for a new mayor and a new alderman–and I miss my old neighborhood.

For ten years I lived in South Shore:  a white graduate student/small business owner/writer in a neighborhood dominated by the African-American middle class.  My neighbors were police officers, schoolteachers, fire fighters, electricians, and social workers. We didn’t have much in common most of the year–except on election day.

As far as I’m concerned, voting is thrilling.  My South Shore neighbors agreed.  Voting in South Shore felt like a small town Fourth of July picnic.  Like Mardi Gras.  Like Christmas Eve when you’re five-years-old and still believe in Santa Claus.   No matter what time of day I went to vote, my polling place was packed.  Voters and election judges greeted each other–and me–with hugs, high fives, and “good to see you here, honey”.  First time voters proudly announced themselves.  Elderly voters told stories about their first election.  People made sure they got their election receipts; some pinned them to their coats like a badge of honor. An older gentleman sat next to the door and said “Thank you for exercising your right to vote” as each voter left.  The correct response was “It’s a privilege.”

Except for occasional confusion when the machine that takes the ballots jams, my current polling place is low key. Election judges are friendly and polite, but hugs are not issued with your ballot.  When the young woman manning the machine handed me my receipt, she told me to have a good day.  I said “It’s always a good day when you get to vote.”  In South Shore, that would have gotten me an “Amen.”  In politically active, politically correct Hyde Park, it got me an eye-blinking look of surprise and a hesitant smile.

I started home, thinking maybe I was the only one in the neighborhood whose pulse beat faster on election day.  A block from the polls I ran into a young man walking with a small boy, no more than six years old.  The little boy stopped me, with a grin so big that he looked like a smile wearing a wooly hat.

This year, I balanced the risk against the joy and decided to once again vote in person.  It is indeed a privilege.