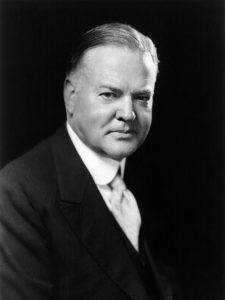 If there is one thing I have learned over and over in the years that I’ve been writing History in the Margins it is that the history “everyone” knows is often wrong, or at best sadly incomplete. That’s as true for a professional historian, once she opens the gate and wanders out of her field, as it is for any one else.

Consider the case of Herbert Hoover. Up until a few months ago, what I knew about Herbert Hoover could be summed up in three sentences.

I was left with the impression that Hoover was uncaring and/or incompetent.  (I never consider the odd move from “successful mining engineer” to “incompetent”.

In recent months, as I started reading about the years between the two World Wars,  I began to find references to Hoover organizing an American relief mission to bring aid to starving millions in central Europe and the new Soviet Union. It turns out that when Hoover took office in 1929, he was known as the Great Humanitarian for his work during and after World War I.

In World War I, Hoover organized the Commission for Relief in Belgium (CRB), which provided millions of tons of food for occupied Belgium and made sure that the German army didn’t take it.* Funded by both private donations and government grants, the commission was an independent organization. Once the United States entered the war, he headed the Food Administration, where he successfully provided supplies to the Allied Powers, stabilized food prices and prevented food shortages at home. Not a small matter since the war had created a food crisis in the combatant nations.**

More impressive, after the war, he headed the American Relief Administration (ARA), which rebuilt infrastructure and provided food to feed our former enemies in Central Europe. When government funding for the program ended in 1919, Hoover transformed the relief program into a charitable organization, raising millions of dollars from private donors. When he extended the aid program to help famine-stricken Russia in 1921, critics in Congress asked why he was helping Bolshevism. His answer: “Twenty million people are starving. Whatever their politics, they shall be fed.”

In 1927, now Secretary of Commerce, he  was the obvious choice to lead the federal response to the Great Mississippi Flood. Chairing a special relief committee, he once again orchestrated a combination of federal and private funding to help the displaced, including the construction of 100 tent cities. (An odd parallel to Depression shanty towns.)

How do you get from “they shall be fed” to “hoovervilles”?

Not surprisingly, the answer is that while Hoover did fail at providing relief during the Great Depression, he wasn’t as uncaring as what I’ve dubbed comic book history*** would suggest. As president, he did not have the independence that he enjoyed in Belgium and Central Europe. (One British official described the CRB as a “Piratical state organized for benevolence.”) On the one hand, he moved quickly to presented Congress with programs to promote fiscal stimulus, including a relief program that included help for farmers facing mortgage foreclosure, banking reform, a loan to the states for feeding the unemployed, and an expansion of public works. (In a stand-off that looks entirely too familiar to a modern reader, many of his proposals stalled or were diluted in Congress.) On the other hand, Hoover took the position that caring for the millions affected by the Depression must be a local and voluntary responsibility—a position that seems at odds with his call for feeding starving millions in Russia in 1921 and yet is entirely in keeping with his success in combining private and public funds to create solutions.

Hoover’s opponents in Congress successfully painted him as cold, callous, and incompetent—though it is not clear that they did much to stem the economic crisis either. The Great Humanitarian became the scapegoat of the Great Depression.

**I’m currently reading about food shortages in Germany and Austria during the war. Definitely not pretty.

***Historical stories that are emotionally satisfying but factually untrue. They just keep coming. Here’s a link to the post in which I first discussed this: History, Myth, and the Gettysburg Address.