And while we’re talking about failures of compassion and the Great Depression, as I believe we were, consider the example of the Bonus Expeditionary Forces’ march on Washington—a story with uncomfortable modern-day echoes

Bonus payments to World War I veterans were a hot political subject in the years after 1919. Congress passed bills approving bonuses twice. First President Harding and then President Coolidge* vetoed those bills. In 1926, Congress overrode Coolidge’s veto and passed what became known as the Bonus Act.

From the veterans’ perspective, the act had a catch. Bonuses would not be paid out until each veteran’s birthday in 1945–26 years after the end of the war.** In theory, veterans could borrow against their bonus, beginning in 1927. That probably seemed like a generous option at the time, but by the end of 1929 banks were short on money to lend, even when backed by the security of the U.S. Government.

In May 1932, an unemployed veteran named Walter W. Walters organized other jobless veterans into a group that called themselves the “Bonus Expeditionary Forces” (BEF). Their goal was to get their bonus money immediately, when they desperately needed it. 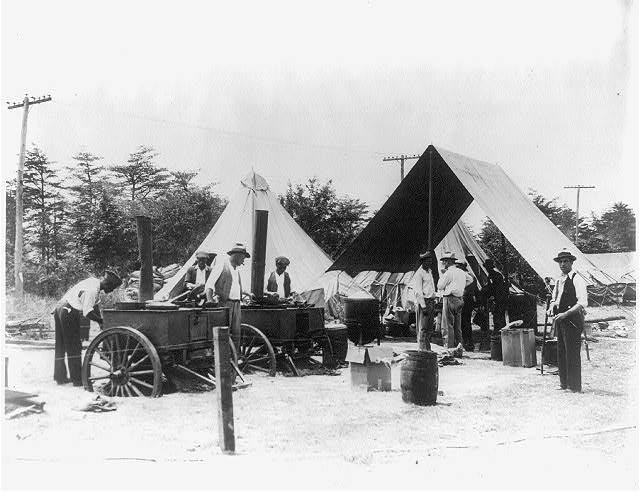 The veterans set up camps around Washington D.C., including a large shantytown on the Anacostia Flats, across the river from Washington’s Navy Yard that was the “hooverville” to end all hoovervilles. Walters organized the camps on military lines and demanded that his forces indulge in “no panhandling, no drinking, no radicalism.” His announced intention was that the BEF would stay until the veteran’s bill was passed. By the end of June, between 20,000 and 40,000 desperate and hungry men occupied Anacostia Flats, many accompanied by their families.

Democratic Congressman Wright Patman of Texas, himself a WWI veteran, took up the cause and sponsored a bill that would give veterans an immediate bonus payment. The House of Representatives pass the bill on June 15. President Hoover’s vow to veto the bill was not put to the test, because it was defeated in the Senate two days later.

On July 28, the D.C. police attempted to remove about fifty protestors who had settled in vacant government buildings on Pennsylvania Avenue. Several of the protestors rushed the police and began throwing bricks. (You can tell this is going end badly, right?) In the ensuing riot, the police shot into the crowd and killed two protestors.

Then the army got involved.

Under orders from President Hoover to drive the protestors back across the river, General Douglas MacArthur formed a cordon around the protestors. Armed with tanks, fixed bayonets, and tear gas, the army drove the crowd of protestors across the Anacostia River to their main encampment. No shots were fired, but hundreds were injured.

With the area cleared, Secretary of War Patrick Hurley sent messages to MacArthur, twice, telling him not to pursue the BEF over the bridge because the president was worried that the government’s reaction might look overly harsh*** MacArthur ignored both messages. HIs troops pressed across the river, where they set fire to the shanty town.

The Bonus Expeditionary Force was effectively defeated by the Army they had served.

The Army tried to claim the operation as a success, but it didn’t play well in the press. The Washington Daily News, which generally supported Hoover, railed against the “pitiful spectacle” of “the mightiest government in the world chasing unarmed men, women, and children with Army tanks. If the Army must be called out to make war on unarmed citizens, this is no longer America.” The New York Times, which was not pro-Hoover on the best of days, agreed: “Flames rose high over the desolate Anacostia Flats at midnight tonight and a pitiful stream of refugee veterans of the World War walked out of their home of the past two months, going they knew not where.”

The image of “pitiful” veterans under attack by the Army also didn’t help Hoover’s performance at the polls that November, when Franklin Delano Roosevelt was swept into office.

*I’m getting curious about “Silent Cal”—so far every time he pops up in the story he’s vetoing something.

**And, ironically, the year World War II would end, producing a new crop of veterans to care for.

Posted in American History, Déjà Vu All Over Again, Twentieth Century and tagged déja vu all over again, Great Depression