My Own True Love recently reminded me about this post, which originally ran in 2018.  It seems like a good time to run it again, for reasons that I think need no explanation. 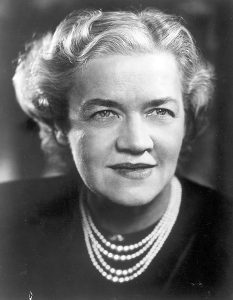 A blog post about Senator Margaret Chase Smith (1897-1995) could easily consist of nothing more than a collection of the trenchant remarks with which she skewered political opponents, reporters, and occasionally herself:

Known as the Quiet Woman from Maine and the “conscience of the Senate,” Smith was the first woman to be elected to both houses of Congress and to be nominated for president on the floor of a national convention. (She was supported by 27 delegates at the Republic National Convention in 1964.) She is best known for being the first Senator to denounce Joseph McCarthy’s red-baiting tactics on the Senate floor.

Like many women who entered politics in the twentieth century, she took what political scientists have described as the “widow’s walk to power,” in which a woman steps into a position of political power after her husband’s death. The presumption is that such women will carry on their husband’s policies. Her husband was elected as the representative to the House from Maine’s Second Congressional District in 1937. When he suffered a serious heart attack several years later, he asked the voters to continue to his policies by electing Smith to replace him–a classic example of the “widow’s walk to power.” She was elected to fill the unexpired term in a special election. Thereafter she was elected in her own right. She served four terms in the House of Representatives, from 1941 to 1949, and then four terms in the Senate, through 1975. She was a staunch Republican, who voted her conscious rather than the party line and made enemies from both ends of the political spectrum.

It takes a special politician to piss off both the Communist-hunting Senator Joseph McCarthy and Soviet leader Nikita Krushchev. We need more like you Maggie.

*Part of a speech known as the “Declaration of Conscience.” McCarthy responded by calling Smith and the six Republican Senators who joined her in speaking out against his tactics “Snow White and the Six Dwarves.”