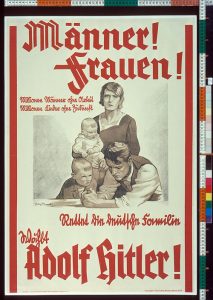 I’m still working my way through the articles Sigrid Schultz published under her by-line in the Chicago Tribune as part of my research for the new book. I’ve reached the days just after the run-offs for presidential election of 1932, in which Paul van Hindenburg defeated Adolf Hitler by a margin of 6,000,000 votes. People thought it was all going to be okay. Schultz quoted more than one politician who said something along the lines of “The republic is saved!”

Writing on April 11, 1932, Schultz reported that five people died on the day of the run-off. (Many more had died during the campaigns leading up to the election.) Her description of one of the deaths caught my attention for a number of reasons, including the fact that it wasn’t a result of the frequent street battles between Nazis, Communists, Steel Helmets (veterans of the German Imperial army who longed for the good old days of the Kaiser*) and the Reichsbanner men (armed civilian supporters of the Weimar Republic). Instead:

The wife of a 67 year old Munich laborer struck her husband with his cane when he attempted to tell her how to vote and he fell dead.

Women gained the right to vote with the revolution that established the Weimar Republic.  Thirteen years later, Hitler and his minions wanted to take away women’s right to vote and offered them marriage and “chivalrous devotion”in its place.** Apparently one woman took her right to vote seriously.

* When push came to shove, most of them voted for a Fascist dictator since they couldn’t put the Kaiser back on the throne.

**As Schultz pointed out in an article dated March 12, it wasn’t clear how the Nazis were going to organize enough husbands and “chivalrous devotion” to go around, given that women outnumbered men in Germany by more than two million.