I’ve been waiting to read Paige Bower’s Overnight Code, the story of groundbreaking computer engineer and ship designer Raye Montague, ever since Paige announced the deal more than a year ago. When I finally got my hands on it, the book more than lived up to my expectations. Overnight Code is an important addition to the growing genre of works that give voice to important and largely forgotten women of science. It is also a powerful and inspiring story of a woman who refused to be stopped by the dual challenges of racism and sexism in the largely male, largely white world of the early days of computer science.

I am pleased to have Paige back here on the Margins to talk about the book and how she wrote it. 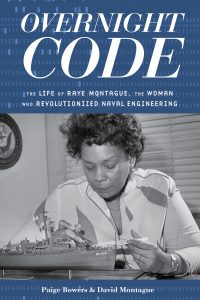 How did you come across Raye Montague’s story? Was your experience of writing her story significantly different that writing about Genevieve De Gaulle, who was the subject of your previous book?

My agent saw Raye on a “Good Morning America” segment and approached her about writing her memoir, which had been something people had been telling her she needed to do for a long time. Her son, my co-author, David, was going to help her write it, but one thing led to another and my agent approached me about getting involved. I was a huge fan of Hidden Figures, so the opportunity to help Raye tell her little-known story was really appealing to me. Unfortunately, she passed away right as the proposal for her book found a home, so I went from working with her on her memoir, to working with David on what would become a biography. The experience was significantly different from my previous book for a variety of reasons: 1. I actually had the opportunity to interview Raye, which was not possible with Genevieve de Gaulle, who had long since passed before I thought to write her about her. So that helped me get more of a sense of who Raye was, how she spoke, what her personality was like, and so forth; 2. David was a fantastic partner in this because he very generously mailed me his mother’s personal papers, dug up people for me to interview, and was a constant sounding board from beginning to end; and finally 3. I’m typically a pretty anxious person, but when I sent this off to my editor, I was far more at peace with the end result of this book than I was with my first. David and I are very, very excited to introduce his mother to readers!

Overnight Code straddles the boundaries between memoir and biography.  How did you navigate that?

You know, I hadn’t really thought about that until now! I suppose it worked out this way because in the beginning it was supposed to be a memoir, and I spent a lot of time listening to Raye tell stories, and was doing what I could to capture her cadences and her indomitable personality on the page. After she passed, I knew the writing voice needed to shift, and there needed to be more reporting and research to counterbalance what she said. By the same token, I didn’t want to let go of the fiery spirit that I had begun to capture. It is what made her so beloved by so many people, and I felt like it was what was driving the narrative chapter to chapter, making events from decades ago still feel so alive and fresh.

There is a significant STEM component to Raye’s story, but you make it easy for a non-technical reader to understand.  How much did you have to learn to about the technical aspects of her story?  And how hard was it? ( I assume you didn’t already have a background in early computers and ship design.)

Dirty little secret: I was not the best math and science student, so I realized that learning about early computers and ship design was the first and most important thing I needed to do. It was a pretty steep learning curve. I had a general idea of the early computer part, but I was able to interview Raye about her experience, as well as some of her former colleagues to get more detail about how that technology worked. David sent me some of his mother’s books about ship design, so that helped me get a better sense of how it developed over time, and how computers were brought in to make the process faster and easier. I interviewed another former colleague of hers to fill in some of the gaps, and he was so good, and made things so clear to me, I felt confident that I could write about it in a way that was easy to understand.  [Pamela here:  She succeeded.]
You do an excellent job of placing Raye’s story in the context of both the civil rights movement and the women’s movement in the late 1960s and early 1970s.  Did anything about her experience of discrimination take you by surprise, or particularly outrage you?

Thank you! She was definitely an extraordinary woman living through an extraordinary moment. I am not sure if I was surprised by her experiences with discrimination, but I was certainly disgusted with the ways in which she was treated with such disrespect because of her color and gender. The saddest part about it is that she went back to be honored by the navy maybe a decade or so after her retirement, women told her that they were still experiencing some of the discrimination she faced.

One of the questions I’m fascinated with right now is how biographers name their subjects, particularly when writing about a woman.  Can you explain why you chose to use Raye’s first name throughout the book?

I think a lot of it boils down to intimacy. I wanted readers to feel close to and be on a first name basis with this little-known woman who lived a big, bold life. But I also think it speaks a bit to Raye, who didn’t want to be called Mrs. Montague, or for me to “Yes ma’am” her. She wanted to be known as Raye, and as a person, not a gender. It was difficult for me to get my head around that when I first began interviewing her. My Southern mama raised me with some pretty old school manners. But from the outset, Raye told me to call her “Raye,” and in doing that, she pulled me close and told me all about her life and times. It was a tremendous honor, one I’ve never taken lightly.

What would you like readers take away from the book?

David and I want people to be inspired by this woman who followed her dreams and didn’t take no for an answer. Having your dreams come true is no straightforward, fairy tale thing. It involves preparation, determination, occasional heartbreak, shifted gears, and ultimate triumphs. Persistence is key. So is resilience. Just look at Raye’s  life and you’ll have all the proof you’ll need! 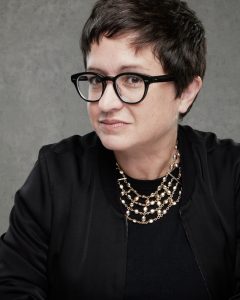 Paige Bowers is the author of THE GENERAL’S NIECE: The Little-Known de Gaulle Who Fought to Free Occupied France.  For the past couple of years, she has been working closely with Hidden Figure Raye Montague’s son, David, on the story of how his mother engineered her way out of the Jim Crow South to become the first person to draft a Naval ship design by computer. That book, OVERNIGHT CODE: The Life of Raye Montague, the Woman Who Revolutionized Naval Engineering, now available wherever you buy your books. .

A lifelong Francophile, Paige earned a master’s degree in Modern European history from Louisiana State University in 2012, and has taught French history classes for LSU Continuing Education. She is represented by Jane Dystel of Dystel, Goderich & Bourret, L.L.C.