I am delighted to kick off this year’s Women’s History Month series with Etta Madden. I don’t remember where we first met on line, but these days we cross paths about something—a book, an experience, garden produce*—almost every day.

In addition to being a kick-ass gardener, Etta is Professor of English at Missouri State University and the author of Engaging Italy: American Women’s Utopian Visions and Transnational Networks (Forthcoming, SUNY Press), Eating in Eden: Food and American Utopias (U Nebraska Press) and Bodies of Life: Shaker Literature and Literacies (Greenwood). She has also published numerous articles on American literature and intentional, spiritual communities in the US and in Italy.

In addition to a Fulbright award, she has been a research fellow at the New York Public Library and is two-time recipient of Mellon fellowships from the Library Company of Philadelphia.

Take it away, Etta! 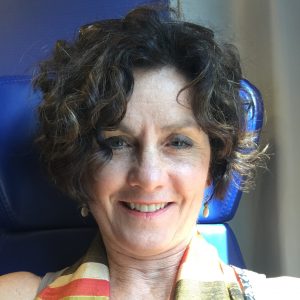 Seriously, people never tire of “coming-of-age,” “rags-to-riches,” “up-by-their-own bootstraps,” “underdog” and “outlier” stories. We have an insatiable desire to know, how did this successful person arrive at where they are? A key word here is “successful.” Many little-known women of the past aren’t viewed as successful and noteworthy because either no one knows their stories–or our standards of success differ from past measures. [I recall my shock at age eighteen, for example, when my mother told me she had been voted “most likely to succeed” in high school and, in her eyes, had succeeded—her goals were to be a wife and mother.]
With Caroline Crane Marsh, as you note, most people have never heard of her husband, although George Perkins Marsh was a US Congressman, an early environmentalist, a co-founder of the Smithsonian Institution, and a US Ambassador to Italy and to the Ottoman Empire for more than a quarter-century. A challenge with Caroline’s story, then, is necessarily raising her husband’s profile while primarily illuminating her strengths and the shadow in which she has remained. It’s impossible to tell her story without also discussing his. While several short and lengthy biographies of George exist (Caroline compiled George’s Life and Letters not long after his death in 1882), and Caroline makes momentary appearances within them, writers of women’s history know how different even George’s life would appear if the spotlight were focused on Caroline and her place within his “successful” and long career.

Beyond that, Caroline’s story reveals what several recent biographies of “the woman behind/beside the man” also underscore. (See Iris Jamahl Dunkle’s Charmian Kittredge London: Trailblazer, Author, Adventurer and Celia Stahr’s Frida in America: The Creative Awakening of a Great Artist, for example. More on these below). The woman’s “coming of age” occurs in a dramatic way but often at a slower pace and later in life—largely because she was acculturated to believe her husband’s life and career more important than hers. This ingrained humility among many women takes time to rise to the surface and shed, like an old skin. And it often occurs after some dramatic moments of awakening to this “lesser” status as learned behavior. Something erupts–in the marriage, the spouse’s profession or in health—which leads to some thoughtful decision making about how to proceed. Caroline’s vision of herself as a forceful presence and a writer comes into focus upon her return from Turkey, after George’s appointment to the Ottoman Empire ends on a sour note in 1854. I believe her turning point was an encounter with Elizabeth Barrett Browning in Italy, a widely read poet whose verses were a form of activism to alleviate social ills. **

Unique to Caroline’s story of developing agency, however, her self-proclaimed “invalid” health creates a picture of an interabled couple. This aspect of her life with George distinguishes the biography I am writing. Caroline lives for years with periodic presenting symptoms such as inabilities to see, to stand and to walk. In Paris, George rolls her through the Louvre in a wheelchair, and carries her up and down stairs when necessary. Caroline’s conditions improve after a surgery for a benign uterine tumor and an eye treatment when she is in her forties. But the way in which she negotiates her marriage, her travels, and her later vocation as an author are all influenced by this “invalid” status.

How did you get interested in American women in Italy in the nineteenth century?

A Fulbright award to teach in Sicily in 2009 spurred the ideas for my forthcoming book, Engaging Italy: American Women’s Utopian Visions and Transnational Networks, which includes Marsh along with two other women (more below). I had been teaching nineteenth-century American literature for years, and I knew many authors such as Nathaniel Hawthorne, Harriet Beecher Stowe, Mark Twain, Henry James and Edith Wharton wrote about Americans in Italy based on their time abroad. And I had been in Italy a few times before—first as a university student. But as I lived abroad as a middle-aged adult, for a period that extended beyond a short tourist jaunt, and in a locale without as many tourists, I began to consider expatriate life—beyond the typical 19th century, educational “Grand Tour,” which had a predictable itinerary and limited time span. Living abroad beyond undergraduate studies or a brief vacation is different. I became especially troubled by the language James and Twain used to describe Americans abroad—as part of a “museum” or “spectacle.” While I could visualize American tourists in that light, I also knew that there were American women such as war correspondent Margaret Fuller who had different experiences in Italy—they were more “engaged” than disengaged from the local culture.

So I began to explore the stories of women who were more than tourists abroad. They followed what I call “later vocations” — they followed their callings to act, taking them on paths much different from the typical tourist. The three women in Engaging Italy (which I refer to as a collective, slice-of-life biography)–Marsh, Anne Hampton Brewster and Emily Bliss Gould—were in Italy during a period of political and social upheaval known as Unification. Each lived abroad for more than fifteen years and seized opportunities to be engaged in these moments of change. Brewster wrote weekly for US newspapers in Boston, Philadelphia, and across the country. Gould wrote for two periodicals before devoting her attention fully to establishing an industrial school and orphanage and fundraising for it. Marsh, as ambassador’s wife and serving the public as needed, also oversaw teachers for a girls’ school and orphanage, chaired committees affiliated with it, and managed a household full of family and guests.

Notably, none of these three women had biological children, and one never married—although she had several opportunities for intimate relationships. Part of their stories, then, centers upon women’s expected responsibilities and behaviors in the nineteenth century, which I believe still resonate today. How and why do women make choices to act in their professions or in the public sphere at different points in their lives? And was their time abroad merely an easy escape by white women of privilege, choosing to live in Italy in an era when the Civil War was raging in the US and then, afterward, when the nation was being rebuilt?
That’s a long answer to your question—obviously, the interest was prompted by my own experiences abroad, my prior teaching and writing in American literature, and many questions about my position at mid-life as a woman with a career and family.

What work of women’s history have you read lately that you loved? (Or for that matter, what work of women’s history have you loved in any format? )
I mentioned earlier these biographies of “women behind the men”–on artist Frida Kahlo, who came to the US because of her husband, and Charmian Kittredge London, who did a lot of her husband Jack’s writing and editing. I recommend them to anyone interested in this theme. Both books are written by academics—well-researched and documented—but are highly readable. Stahr and Dunkle place Frida and Charmian, respectively, into the worlds of art and literature. But at the same time the authors place the women into the larger context of the American social fabric and global travels and connections. We see these women of the early twentieth century not isolated in domestic spaces but connected to culture that extends beyond the walls of artist’s studio and writer’s garret. Most importantly, we see the fortitude that drew their spouses (and others) to them and the women’s growing passions for their work. Their growing agency speaks to everyone who knows what it feels like to have doubts about abilities and purpose. I think that’s just about everyone!

My question for Pamela: You write vividly and regularly–about women’s history and history in general. I believe you blog at least twice a week and also write newsletters. I know your early January blog lists topics you’ll cover during the year. Do you ever worry about running out of topics? How do you come up with your ideas? And how far out do you line them up?

I am endlessly curious and find ideas pretty much every where.  Something catches my imagination or makes me question something I thought I knew.  (Write a history blog twice a week for a number of years and you will be astounded at the depth and breadth of your own  ignorance.) I read a book or visit an exhibit that I want to share.  I have an odd bit  that doesn’t fit into a project I’m working on.  Quite frankly, I  don’t worry about running out of topics as long as I am reading, visiting museums and historical sites, and interacting with people doing interesting things related to history. And I intend to do all those things as long as I am able. (I don’t know about anyone else, but I eager to hit the road again.)

I have a long list of story ideas that I think might make good blog posts.*** When an idea catches my imagination, I open a document for it in the Scrivener project that serves me as an”editorial calendar”. If I’m lucky, I have a few thoughts of how it might go and a reference or two. Sometimes it is just a name or a few words.  And even with that long list, there are days when a blog post is due and I’ve got nothing.

How far out do I have them lined up?  (pauses to laugh) In the best of all possible worlds, I would have blog posts written several weeks out, but in fact I usually scramble to meet my own deadline.

*Full disclosure, Etta is a much better gardener than I am. Her posts about her garden make me feel like a garden slacker. Which I am.

**I don’t know about you, but I am now inspired to re-read some Elizabeth Barrett Browning’s poetry.

***I also have a large “dud” folder full of blog posts that didn’t work out. I can’t quite bring myself to trash them, because sometimes they come back to life.

Want to know more about Etta Madden and her work?

For more on Anne Hampton Brewster, see the blog post Nineteenth-Century News from Rome and a Library Company Fireside Chat video, Mediterranean Quarantine: Perspectives of a Person of Privilege.

*   *   *
Come back tomorrow for three questions and an answer with historian Daphne Geanacopoulos. We’re talking about pirates from a unexpected perspective.