March 8 is International Women’s Day,* which makes it an appropriate day to interview the three people behind the Berlin-based The Dead Ladies’ Show, which celebrates amazing women of the past with live-on-stage history storytelling and a monthly podcast. I am a huge fan of their work. In fact, attending a live performance of The Dead Ladies Show in Berlin is high on my bucket list.**

The show is put together by an international and multilingual crew:

Dead Ladies Show co-founder Katy Derbyshire (UK) is a renowned translator of contemporary German fiction and now publisher at V&Q Books. Her translation of Clemens Meyer’s Bricks and Mortar was nominated for the MAN Booker International Prize and won her the Straelen Translation Award. She also teaches translation and co-hosts a monthly translation lab in Berlin.

Dead Ladies Show co-founder Florian Duijsens (NL) works as a writer, editor, and translator,  and teaches at Bard College Berlin. His work has appeared in The Guardian, The Quarterly Conversation, and Asymptote, among other publications, and he has also  moderated literary events at Soho House, ICI Berlin (Institute for Cultural Inquiry), ILB  (The Berlin International Literature Festival), and LCB (Literarische Colloquium Berlin).

Podcast creator and producer Susan Stone (US) is an award-winning freelance radio, print, and online journalist with a focus on culture and storytelling. She spent a decade on staff at public radio network NPR before receiving a Bosch Fellowship to come to Berlin. Susan has since contributed to NPR, Los Angeles Times, WWD, and BBC among others. She is a regular member of the RIAS Media Prize jury, a consultant for the schreiben & leben​ project from Lettrétage, and is currently producing podcasts with Human Rights Watch and V&Q Books.

Take it away, y’all: 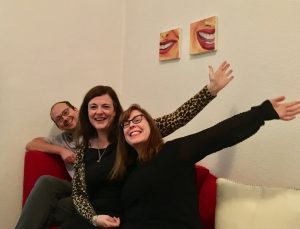 The show is an interesting mix of women most of us think we know something about and women very few people have heard of.  How do you choose which women to include?

Katy Derbyshire: We don’t! Or we don’t choose all of them. To begin with, we asked people to volunteer to present women they admired or were fascinated by, setting only three rules: They had to have been dead for at least six months, they had to have identified as women – and there were to be no fascists (that was to field the endless Leni Riefenstahl  proposals, being based in Berlin, but it has proved a useful guideline in other cases too). Now that we have funding most of the time, we invite a broad range of presenters and let them choose who to talk about. When one of us hosts presents a dead lady, we try to fill in any gaps that have come up, or we have special themes: women of Berlin, women for whom migration played a role in their biographies. But sometimes we’re just as fascinated by a particular woman and are simply driven to share her story.

The Dead Ladies Show is both a live performance and a podcast.  That’s an unusual combination.  Did you plan on doing both from the beginning?

Florian Duijsens: For a show that had its origins in a tipsy dinner when Katy and I took turns reading each other the work of miraculously funny women of yore, we already thought it was an exciting reach to bring that to a Berlin stage, so to have our audience remain loyal and even grow, and our invited presenters (often former audience members!) bring stunning stories about their favorite women to vivid life was already a great treat, let alone our concept spreading overseas and across the continent to New Zealand, the US, and Belgium—a podcast was never even a glimmer on our minds. It was our fabulous podcast producer Susan who started recording the shows soon after we started, and who crafted and fine-tuned not just the recordings, but even our live presentations, making sure they are just as entertaining and enlightening to the people not with us in the room. Having actual warm-blooded humans in the room, however, has always been so important to us, and I believe those little sighs and big guffaws Susan captures on mic really communicate the communal aspect of our whole project to the podcast’s listeners—so we can’t wait to get back on our (outside, socially distanced) Berlin stage again sometime soon this year 🤞

What are some of your favorite podcasts about  women, history, or women’s history?

Susan Stone: People sometimes ask us, “What about a Live Ladies Show?” So my response to them is to recommend the fantastic podcast The Last Bohemians, which started in 2019, and is currently in the middle of its second season. The show profiles unorthodox women who weren’t afraid of behaving badly or breaking new ground, and are still doing it later in life — like 87-yr-old Molly Parkin, a fashion editor, painter, and erotic novelist who got her first real kiss from Louis Armstrong, or punk artist and activist Gee Vaucher or playwright and critic Bonnie Greer who grew up on the South Side of Chicago and is now a British institution with an OBE.

I don’t listen to too many general history or, to be honest, women’s history podcasts, as I tend to go for the investigative genre as a casual listener. But I really have loved some episodes of Throughline from NPR (shoutout to my ‘alma mater’ – I worked at NPR for 10 yrs), especially the one on American preacher The Public Universal Friend, which is a nice companion to our show on the Chevalière d’Eon. And the crew at What’sHerName are some of the nicest people in podland; I even appeared on one of their episodes, The Ancestors, talking about my grandmother, who went from being a young championship highland dancer in Glasgow, Scotland to becoming the postmaster of a tiny and wild Florida town called Rattlesnake after emigrating to the US.

Question for you: You’re a historian and author who has published books about women as well as other topics. Do you see a rising interest in content about women in history? It feels like we’re getting a steadily growing stream of newsletters, books, podcasts, blogs, and even a Hillary Clinton-produced docu-series — that all take on the subject of women from history. Is there, as I hope, an untapped hunger for this material? And might there (as I hope not) be a ‘women’s history industrial complex’ in the near future?

My personal opinion—based on the way I grabbed biographies about historical women whenever they crossed my path as a child—is that the hunger for content about women in history has been around for a long time. Production of that content began to appear with the rise of women’s history as an academic field in the late 1970s. The oldest podcast on women’s history that I know of, the History Chicks,began in 2011, a few months before I started History in the Margins. In the intervening ten years, popular and academic works on women’s history has become increasingly easy to find, though we still have to fight to have women included in textbooks and curricula more than a sidebar.

*Which is  celebrated as a holiday in many places, but not in the United States.  (My understanding is that it smelled of socialism to the powers that declare national holidays.)  If you’re curious, here’s a place to get some answers:  https://www.internationalwomensday.com/

** For now, I’m making do with their first Zoom show, which will be on March 11 in collaboration with StAnza, Scotland’s international poetry festival. Tickets are free. Info here: https://stanzapoetry.org/festival/events/past-present-annette-von-droste-h-lshoff . Not the same as being there in real life, but I am still thrilled.)

Want to know more about the Dead Ladies Show?

Listen to the Podcast on Apple Podcasts: https://podcasts.apple.com/us/podcast/dead-ladies-show-podcast/id1289661254

Come back tomorrow for three questions and an answer with Kathleen Stone, talking about women who pursued professional careers in an era when women were expected to stay home.