Anna Malaika Tubbs is the author of The Three Mothers: How the Mothers of MLK Jr., Malcolm X, and James Balwdin Shaped a Nation. She is also a Cambridge Ph.D. candidate in Sociology and a Bill and Melinda Gates Cambridge Scholar. After graduating Phi Beta Kappa from Stanford University with a BA in Anthropology, Anna received a Master’s from the University of Cambridge in Multidisciplinary Gender Studies. Outside of the academy she is an educator and DEI consultant. She lives with her husband, Michael Tubbs, and their son, Michael Malakai.

Take it away, Anna! 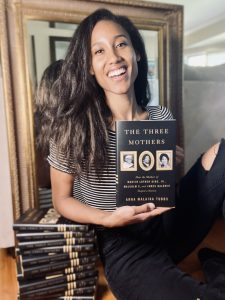 What inspired you to write about these women?

I have always been passionate about correcting the erasure of Black women. When I started my PhD I knew I wanted to bring attention to Black women who had been wrongfully forgotten. We often hear the saying that “behind every great man is a great woman,” a saying that really bothers me, because most likely in such cases that woman is right beside the man, if not leading him. So I wanted to think about things differently and introduce the woman before the man. I believe mothers are some of the most underappreciated and unseen people in society and I felt it was time to honor them with the attention and credit they deserve. With all of this in mind, I dove into researching mothers of famous Black men. When I came across Alberta’s, Berdis’s, and Louise’s stories that were filled with nuance, diversity, as well as similarities and intersections as a result of the closeness in their birthdays as well as their famous sons’ birthdays, I just knew I had to dive deeper and share their names with the world. Their lives offer guidance and encouragement for Black women today, they show us different ways to be women, Black women, Black mothers, activists, educators, and much more. They remind us how difficult the world can be while also showing us ways to actively change it.

Who are some of your favorite authors working in women’s history today?

Isabel Wilkerson – what she was able to do with The Warmth of Other Suns and now Caste is deeply inspiring. Her research is crucial and her ability to translate years of work into beautiful narratives that allow us to understand difficult concepts easily is something I try to emulate.

Patricia Hill Collins – her extensive sociological work on all aspects of Black womanhood and Black feminism over decades provides the basis of so many projects, interventions, and policies that impact our lives. You simply cannot do research on anything concerning Black women without engaging in something Patricia Hill Collins produced.

Melissa Harris-Perry – She is the kind of public intellectual I hope to become. She is brilliant and she uses her work to inspire change within, but more importantly beyond, the Ivory tower. She reminds all Black women of our worth and the treatment we deserve even if we’ve been denied it time and time again in the United States. Sister Citizen is one of my all-time favorite books.

How can your book help us better understand the civil rights movement as well as our current political/social climate?

At the center of The Three Mothers is a discussion of the dehumanization of all Black people. Motherhood is about creation, the giving of life, and this role becomes even more powerful in communities that are denied humane treatment on a daily basis. We as a Black community are continuing a long-fought struggle for our humanity, dignity, and worth to be recognized. This book, by focusing on Black motherhood, acknowledges that fight and shows how despite the many ways that our humanity has been denied in our nation, we have continued to find ways to humanize ourselves, give life, and move our country forward.

Question for you – Who would you say are women warriors of today?

In Women Warriors, I concentrated on women for whom battle was not a metaphor. By that standard, some of the most amazing modern women warriors are the Kurdish women who fought against Isis. They are the subject of a new book by Gayle Tzemach Lemmon, The Daughters of Kobani. I loved her previous book, Ashley’s War and I’m looking forward to this one. 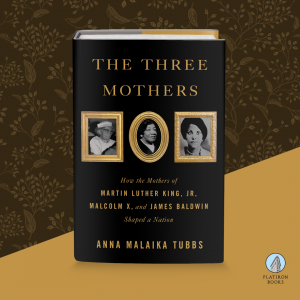 Want to know more about Anna Malika Stubbs and The Three Mothers?

Come back tomorrow for three questions and an answer with historical novelist Diana Giovinazzo.