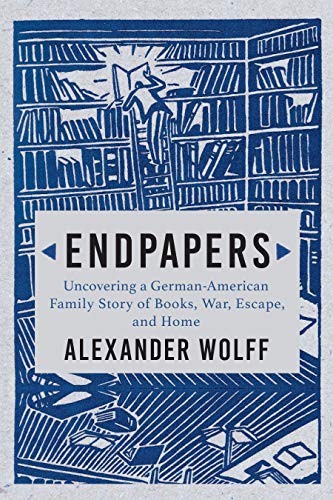 Let me start with the short version: Endpapers: A Family Story of Books, War, Escape and Home is one of the best works of non-fiction I’ve read in a while.

In 2017, former Sports Illustrated journalist Alexander Wolff  set out to explore his family’s German roots. The result is an extraordinary mixture of memoir, journalism, history and an up-close look at one family’s complicated relationship with Nazi Germany.

Two biographical narratives stand at the heart of Endpapers. Wolff’s grandfather, Kurt Wolff, was a leading publisher of contemporary literature in Germany, publishing authors whose works would later be burned by the Nazis. ( Think Kafka, Thomas Mann, Günter Grass.) In 1933, the day after the Reichstag fire, he fled Germany with his wife Helene and took refuge in the United States, where they founded a new, equally influential, publishing house, which served as gateway for introducing American audiences to major European authors in translation, including Boris Pasternak’s Doctor Zhivago.*  They left behind Kurt’s family from his first marriage, including Wolff’s father, Niko. Niko served in the German army, spent time in a POW camp and emigrated to America in 1948, with a little belated help from his father. He became a chemist with Dupont and assimilated to a degree Kurt never managed. But he never told his son about his wartime experience. And Wolff didn’t ask.

In the course of tracing their stories, Wolff discovers family secrets. He learns the intricacies of which family members escaped being labeled as Jewish by the Nazis and which did not. He realizes how deeply his grandmother’s family, the Mercks of Merck Pharmaceuticals, were involved with the Nazis. He takes a fascinating and horrifying detour into the tragedy of the 1972 Olympics in Munich. **And he eventually confronts the questions of guilt, shame and accountability that many Germans of his generation struggled with decades earlier and the larger questions of “moral inheritance” in general.

Ultimately, Endpapers is not only the gripping story of one family’s history, but an important exploration of our collective responsibility for the past.

**It turns out that a security specialist hired by the Olympic Committee to “tabletop” the event predicted the murder of the Israeli Olympians in the Olympic Village with frightening accuracy in one of several worst-case scenarios. The committee chose not to act on them.
* * *

CODA: Endpapers is a prime example of why I always read the acknowledgements. Wolff buried some good stuff in the midst of the usual “thank-you” list, including a brief discussion of historical novels that shaped his feel for the period and this gem:

Nor could I have told this story without two other women close to Kurt and Niko, my grandmother Elisabeth Merck Albrecht and step-grandmother Helen Mosel Wolff. Their voices underscore how much this narrative, despite its patrilineal spine, owes the women of our family. It is a truism borne out to me repeatedly over years of writing about sports figures, many of them alpha males reluctant to reveal their vulnerabilities: all praise to the mothers and sisters and wives who dress the skinned knees, keep the scrapbooks, vividly recall the failures and thus better sense the full arc of a story.