First, a caveat: I got an email from a regular reader in response to my first post on Eddie Rickenbacker in which she said she had vivid memories of reading the story I’m about to tell you in the sixth grade.  I’m pretty sure I first read this story a couple of weeks ago.(1) But it’s possible that all of you already know it. If so, humor me.

When the United States entered the Second War, Eddie Rickenbacker was the president of Eastern Airlines, and one of the most important figures in American aviation.(2) In September, 1942, Secretary of War Henry Stimson asked Rickenbacker to evaluate the condition of military equipment and personnel in England, calling on what Stimson described as Rickenbacker’s “clear and sympathetic understanding of human problems in military aviation.” (In other words, he’d been there and done that.) Stimson offered Rickenbacker a commission as brigadier general. Rickenbacker refused. Then Stimson offered him a commission as major general. Rickenbacker again refused. Captain Rickenbacker (3) accepted the job with an annual salary of one dollar and paid his own expenses. He wanted to maintain his independence as an observer.

When Rickenbacker returned to the United States a month later, Stimson sent him to perform a similar mission in the Pacific. (He also was given a message from President Rooosevelt to General MacArthur, with instructions to memorize it and deliver it verbally. We do not know what that message was, but the assumption is that it was a sharp response to MacArthur’s very public, very negative comments about the administration.)

After visiting several bases in Hawaii, Rickenbacker was given transportation to the South Pacific on an older B-17. En route between Honolulu and a fueling station at Canton Island, the B-17 went hundreds of miles off-course, due to an out-of-adjustment navigation device. Out of fuel, the aircraft’s commander, Captain William Cherry, was forced to ditch the plane in a little-traveled part of the Pacific. It was the beginning of a 24-day ordeal for Rickenbacker, his friend and business partner Colonel Hans Adamson, and the plane’s six crew members.

The eight men retrieved three rafts, some limited rations, and a few supplies from the sinking plane. They lashed the three rafts together to make a larger target. Rickenbacker immediately took charge, even though he was a civilian.(4) He doled out what food and water they had in equal shares each day.(5) He alternately cajoled and insulted the men. When one tried to commit suicide, Rickenbacker accused him of being a coward and hauled him back into the boat. Rickenbacker became the focus of the other men’s anger—anger which may have helped some of them stay alive. (He later found out that several of them swore an oath that they would survive just so they could have the pleasure of burying him at sea. )

They were constantly low on food and water. (And low may be too generous a description.) They collected rainwater when Pacific squalls blew through and caught occasional fish. (Though never enough.) At one point, a sea bird landed on Rickenbacker’s head. He reached up slowly (coached by the other men), caught it, twisted its neck, and divided it into eight equal shares. (They used the innards as bait for more fish.)

On November 13, navy pilots located the missing crew in the Ellice Island chain, more than 500 miles beyond their destination of Canton Island. All of them suffered from exposure, dehydration, and starvation. (One member of the airplane’s crew, Sergeant Alex Kacmarcyk, died before they were rescued. ) Rickenbacker had lost sixty pounds and was badly weakened by their ordeal. He could have gone home, where he would have received a hero’s welcome. Instead he chose to continue on his mission. 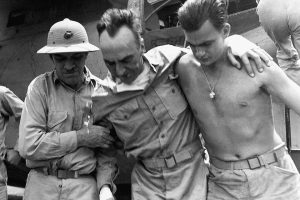 Once home, he made extensive recommendations to Secretary Stimson about additional equipment that would increase the chances of survival in life rafts, including a rubber sheet to protect the raft’s occupants from the sun and catch water and emergency fishing kits. His recommendations also led to the the development of a small kit to distill drinkable water from sea water. (Both items are now standard equipment on military life rafts.) 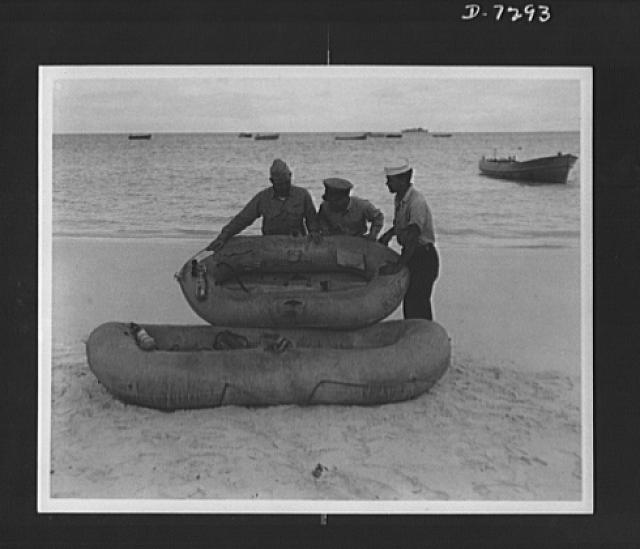 Workers with Rickenbacker’s life raft. Rickenbacker used the story of his rescue to illustrate the value of milage restrictions during the war: “One tire that is not wasted on pleasure driving may save the lives of seven men as ours was saved,.

In April, 1943, Rickenbacker accepted one more mission from Stimson: a three-month trip inspecting military bases and production facilities in Africa, Asia, and the Soviet Union.

As the 1944 presidential election approached, Rickenbacker was approached with the idea of running for president against Roosevelt, whom he had disagreed with often and loudly. He declined on the grounds that he was too controversial to win.

(1)  If it was discussed in my sixth grade class, I wasn’t paying attention.

(2) The only American aviator of greater renown at the time was Charles Lindbergh, whose relationship with the United States military in World War II was complicated. But I digress.

(3) As I mentioned in my previous post, he was technically Major Rickenbacker at this point, but he continued to go by captain, a rank he felt he had earned. Anyone want to take bets on whether he would have accepted an honorary doctorate if someone offered him one?

(4) This should surprise no one. Rickenbacker was a Big Deal and used to running things. One of the crew members, Joe Bartok, speaking about the events in 1998 at Auburn University, probably summed up the feelings of them all when he said: “Captain Eddie Rickenbacker—when I was fourteen years old he was my hero because the war, World War I.” When Rickenbacker climbed into that B-17 9 years later, Bartok was more than a little star struck.