Here in the United States, we are heading into the Memorial Day weekend. In the past, My Own True Love and I have always found a way to honor the war dead on Memorial Day. We’ve gone to services in small towns and distant suburbs, usually put on local VFW chapters with a Boy Scout color guard, and visited military museums. In recent years, our go-to service has been the one put on in Grant Park, which manages to have all the emotional punch of a small town service even though it occurs in the heart of downtown Chicago.

In 2018, we had the amazing experience of attending the memorial service at the American Cemetery in Normandy, near Omaha Beach as part of a D-Day tour put on by the National World War II Museum in New Orleans.* (In some ways, the entire tour was an extended Memorial Day experience, defined by General John Logan, the official holiday’s founder, as “cherishing tenderly the memory of our heroic dead, who made their breasts a barricade between our country and its foe.”) 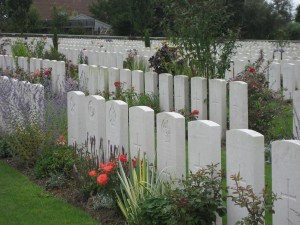 We expected the service to be a heart-wrenching experience, but it soon became clear that the official service was too distant to have much impact. For us, the real memorial service occurred when our guide led us through the cemetery, telling us stories about fallen soldiers, love, loss, and heroism. The National World War II Museum had provided us with a flower arrangement and a large number of white roses. One member suggested that we leave the arrangement on the grave of an unknown soldier. Another suggested that the veterans in our group present the arrangement. It was a powerful moment. Tears were shed. (In fact, I am tearing up typing this after the fact.) As a ceremony, it had all the impact that the official celebration did not. Afterwards, we scattered to place individual white roses on graves.**

As I walked back to the bus, I heard the sound of a lone bugle playing Taps at the end of the official celebration. I stopped to listen with a lump in my throat and an ache in my chest. The perfect ending.

Remember the fallen.  Thank the living.  Pray for peace.

*It appears that I never wrote a blog post about our visit to the museum back in 2015. The short version: it was fabulous. We signed up for an all-day special tour that was remarkable

** I would have liked to place mine on the grave of one of the four women buried in the cemetery. (I am pleased to say that one of the male members of the tour asked where they were buried before I could.) Unfortunately, their graves were in a portion of the cemetery that was roped off to protect the ground due to recent weather conditions. While I am perfectly willing to kick open a door when there is a good reason, this didn’t seem to be one of these times.