I’m currently working on wartime food shortages in Berlin in the First World War. The short version? Things were rough. Then, in the winter of 1916, things got worse.

Germany was not self-sufficient in terms of food even before the war. The country relied heavily on imported grain and fats, not only to feed its people but to feed its livestock. When the war began, access to imported foodstuffs was greatly reduced. At the same time, both draft animals and farm workers were conscripted into the German army, making it difficult for German farmer to produce crops at pre-war levels. Add in some bad decisions by the German government regarding food distribution and a couple of years of bad weather, and you have a food supply trainwreck.* 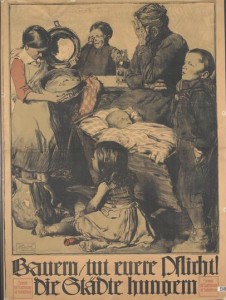 Farmers – Do your duty. The cities are hungry

Shortages of grain and bread led desperate German housewives to replace them in the family diet with potatoes, which became scarce in turn. Rising prices and inadequate supplies of meat, butter, and even jam, which poorer Germans turned to when they could no longer obtain dripping or butter to spread on their adulterated “war bread”, made putting food on the table a miserable struggle for everyone except the wealthy.

Berliners called the process of queuing up to buy food the “Poloniase”after the lines of partners in the processional dance of the same name. Women would begin to form lines in front of stores soon after midnight, bringing sacking and light-weight chairs to sit on during the hours of waiting–a darker ancestor of young music fans waiting to buy concert tickets. And like those would-be concert goers, they often sat for naught because there were more people in line than available tickets, or butter. As the war went on, lines became longer and there was less on the store shelves. By October 1915, the combination of crowds queuing for food and the absence of affordable food in the marketplace, led to “potato battles” and “butter riots” in the working class neighborhoods of Berlin, predecessors of the street violence that would be a regular feature of politics in the Weimar republic.

Some Berliners attempted to bypass the official supply chain. The truly wealthy brought in food from their country estates. The well-to-do bought goods on the black market. The less well-to-do took to urban gardening on small plots, raised small animals on their apartment balconies, basements or backyards,*** and traveled to the surrounding countryside on illegal foraging expeditions, known as “hamster-ing.”

Food not only became increasingly scarce and increasingly expensive, it also declined in quality. A wide range of substances were used to “stretch” the flour in bread. Some were perfectly palatable, if not what Germans was accustomed to: flours made from corn, lentils and other legumes, chestnuts, soy beans and bran. Others , such as sand and sawdust, were not even edible. As familiar foods vanished from the shops, manufacturers began to offer substitutes: by the end of the war, more than 11,000 ersatz (substitute) products were on sale in German shops, including thirty-three egg substitutes and 837 different types of different sausage. Some unprincipled manufacturers created ersatz products that had no food value, or were actively dangerous. Even honest attempts to create substitutes were often unpleasant to eat. (One of my sources for this period described ersatz sausages as “little tubes of slime.” Yuck.)

Conditions went from bad to disastrous in the “rutabaga winter” of 1916 and 1917, when the failure of the potato crop due to unseasonably cold and wet weather, and the success of the British shipping blockade left most Germans to subsist on a diet of rutabagas. (For some reason, the German government, which had failed at stockpiling potatoes or wheat, had 80 million tons of rutabagas in storage.) The government attempted to overcome the popular perception that rutabagas were good only as animal fodder by dubbing them the “Prussian Pineapple” and providing recipes not only for soups and casseroles, but for rutabaga cakes, breads, coffee and even beer. No one was fooled by this attempt, and in fact, the propaganda only made Berliners more bitter about the situation when rutabagas in their disappeared in their turn in the spring and summer of 1917.

Rutabaga braised in beef broth and seasoned with a little bacon is quite tasty. Ground dried rutabaga coffee and rutabaga jam sweetened with saccharine? Not so much. (Though possibly better than a little tube of slime.)

*Not the first word that came to mind  to describe “a complex and utterly disordered and mismanaged situation” But I try to limit my use of gratuitous vulgarities,** both on the page (screen?) and in conversation.

** One struggle to find the right word led to another. Not sure whether the word I chose not to use was profanity, obscenity, or something else, I finally opted for the more general “vulgarity.” Here’s a useful discussion of the differences.  And yes, I am running down rabbit holes a lot these days.

***Goats were particularly popular. Though probably not on balconies.

Posted in Twentieth Century, World War I and tagged rationing and war shortages, World War I