Between the combination of the approval of Juneteenth as a federal holiday and the July 4th holiday , the American Revolution has been on my mind for the last few weeks. And thanks to a recently published book, those thoughts have taken some new turns.

It is not often that a book crosses my desk that causes me to look at the American Revolution through a new lens. Historian Karen Cook Bell’s Running From Bondage: Enslaved Women and Their Remarkable Fight for Freedom in Revolutionary America is such a book. Bell tells the compelling stories of enslaved women and the ways in which they fled or attempted to flee bondage during and after the Revolutionary War. By reconstructing fugitive women’s stories through newspaper advertisements, first-person accounts in trial records, antebellum memories, and interviews with former slaves, Bell is able to explore the individual and collective lives of these women and girls of diverse circumstances, while also providing details about what led them to escape. She demonstrates that there were in fact two wars being waged during the Revolutionary Era: a political revolution for independence from Great Britain and a social revolution for emancipation and equality in which Black women played an active role.

It is a fascinating perspective, that highlights the tension between freedom and slavery that was part of the United States from the beginning. A tension that is often nodded at in classrooms and popular accounts of history without being explored in a meaningful way.

I am delighted to Karen Cook Bell here on the Margins to answer some questions about Running from Bondage. 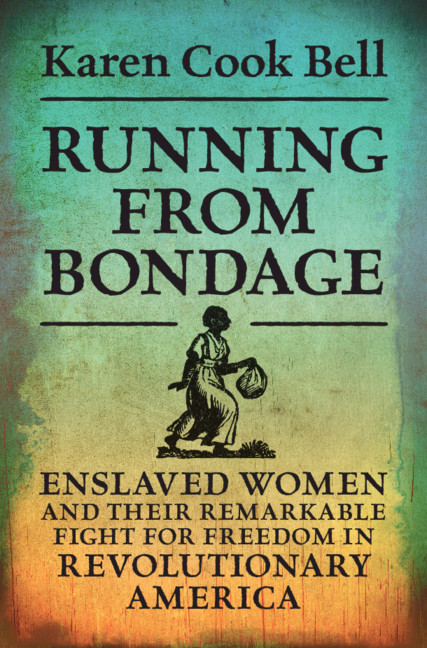 In Running from Bondage, you explore the experience of black women who attempted to escape from slavery during the American Revolution.  What inspired you to write about these women?

Researching my first book introduced me to women who fled slavery either alone or with their families during the late eighteenth century. This led me to question how widespread was the flight of enslaved women. My research led me to the American Revolution which according to historian Benjamin Quarles was the first large scale slave rebellion. I wanted to tell the stories of these women who fled or attempted to flee bondage during the Revolutionary Era.

How does adding these women back into history change our understanding of the American Revolution?
The American Revolution was based on the premise of freedom for the colonies from the control of the British monarchy. The ideals embodied in the Declaration of Independence that all men are created equal and have the right to life, liberty, and the pursuit of happiness resonated with enslaved women who used the rhetoric of the Revolution to claim their right to freedom. Women heard about these ideals from listening to the conversations of their enslavers as well as through the slave grapevine which carried news from plantation to plantation and from city to city.

The American Revolution brought into sharp focus the paradox of slavery and freedom. African American women contributed mightily to the story of American Independence. They believed in the independence of the individual. They valued in the most fundamental way what Thomas Jefferson and others would identify as inalienable rights.

Moving forward, how does their re-inclusion change our understanding of the growth and development of the abolitionist movement?

Instead of viewing Black women at the margins of the American Revolution and abolitionism, it is important to see them as visible participants and self-determined figures who put their lives on the line for freedom. They protested with their feet by running away which underscores the vital role of Black women in seeking to move the nation toward a more perfect union.

What were your greatest challenges in researching the experience of these women?

I began this study five years ago and the research for the study brought me to the realization that there is so much that historians can uncover in the lives of enslaved women. Although the evidence is fragmented, the experiences of fugitive women are far from unknowable. I used runaway slave advertisements, trial records of fugitive slaves, as well as an interview with George Washington’s escaped slave Ona Judge. There is a great amount of literature on enslaved people who escaped during the 1800s, however, the accounts of runaways during the 1700s are limited to colonial newspaper advertisements for runaways.

Each fugitive advertisement is valuable because it reveals the agency of enslaved women who despite formidable obstacles risked everything including their lives for freedom. Each advertisement describes the story of a real person, not an abstraction. When further research is done in other sources, real human beings begin to emerge from the records. We do not know the ultimate fate of the majority of the individuals named in the advertisements. But given these limitations, the runaway advertisements offer a remarkable amount of information about women caught in a horriﬁc system of bondage.

The silences within the runaway newspaper advertisements were my greatest challenge. I had to imagine the varied meanings and possibilities that were inherent in these silences. For example, I had to reconstruct the backstory of the women featured in my book, their lives during slavery, why they ran away at their historical moment, and the challenges they faced.

You use the word “fugitivity” to describe these women’s actions.  The word seems to be a term of art in writing about Black slave resistance.  Can you talk a little bit about what is packed into that word?

As articulated by historian Marisa Fuentes, fugitivity denotes the experience of enslaved women as fugitives – both hidden from view and in the state of absconding. It also signiﬁes the fragile condition of runaways who came into visibility through runaway advertisements. It captures the agency and mobility of enslaved women who escaped or who attempted to escape bondage.

Is there an individual woman’s story that stands out for you?

Black women were not willing to leave their children behind and were willing to risk running away if it meant a chance for freedom. This was the case for Jenny an enslaved woman that is featured in Chapter 3 who was the mother of a two year old named Winney. Jenny escaped slavery from Virginia in 1776 while she was “big with child” according to the advertisement of her escape. Jenny and her child were on the run for seven months when her enslaver placed an advertisement for her escape.

Also, the story of Margaret Grant will surprise people. Margaret escaped slavery twice, first in 1770 then in 1773 both times from Baltimore, Maryland; and in her first escape she wore men’s clothing and sought to conceal her identity by dressing as a waiting boy to an escaped English convict servant, John Chambers. So Margaret sought to escape by passing as both white and male performing fugitivity in a way that Ellen Craft, another escaped slave, would do decades later.

My readers are always interested in the historian as well as the history.  What inspired your  interest in history?  Did you get hooked on history as a child or did your interest come later?

I was an Accounting major as an undergraduate and changed my major to history during my junior year. I have always had an interest in history growing up from reading the history books of my siblings to writing about historical events for my college newspaper. After viewing a project on African American spirituals, I wondered about the people who created these sorrow songs and wanted to know more about their experiences. I changed my major to history thereafter and have been researching and writing about people who have been marginalized from power and the archives ever since.

And just for fun:   If you could pick one woman from history to put in every high school history textbook, who would it be?

There were so many great women in history that it would be difficult to choose just one. However, I would choose Congresswoman Shirley Chisolm, the first Black woman elected to Congress in 1968 and the first Black woman to run for President of the United States in 1972. She was not a politician but found her political voice as a wife and educator. Her story represents an important part of Black women’s political history and adds to the discourse of how African American women organized in their communities, protested slavery and segregation, built institutions, and fought for equal access to the ballot. Black women have been in the forefront of movements to address iniquity, social oppression, and freedom for the Black community for centuries. This is a fight that began during the Revolutionary Era. 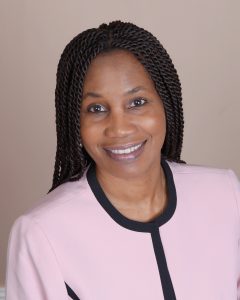 Karen Cook Bell is Associate Professor of History at Bowie State University. She is the author of Claiming Freedom: Race, Kinship, and Land in Nineteenth-Century Georgia, which won the Georgia Board of Regents Excellence in Research Award. She specializes in the studies of slavery, the Civil War and Reconstruction, and women’s history.