And speaking of the travails of navigating the Missouri River, as I believe we were, I am reminded of another riverboat-related museum on an earlier road trip, back in 2013. It’s still one of my all-time favorites. I hope you enjoy it.

The museum weaves together three separate stories into an exciting whole: life in frontier America, the steamboats that served as the semi-trailers of the nineteenth century, and five friends who banded together to excavate one sunken steamboat.

In the nineteenth century, before the Army Corps of Engineers worked its magic, the Missouri River was as treacherous as a navigable river could be. Civil War journalist, and Union spy, Albert Deane Richardson described the river as “a stream of flowing mud studded with dead tree trunks and broken bars.” Nonetheless, the Missouri was a major trade route for frontier America and a profitable one. A steamboat could pay for itself with a single successful voyage. Just as well, since the average steamboat only lasted five years on “old Misery”. **

On September 5, 1856, near what is now Kansas City, the steamship Arabia hit a walnut snag that stove in her hull. The ship was lost within minutes. The human passengers all escaped, though one unlucky mule did not, but more than 200 tons of cargo intended for settlements along the river was lost.

Over time, the river shifted, leaving the ship buried forty-five feet deep in what became a farmer’s field. The Arabia was buried but not forgotten. Rumors that the ship held treasure (described as everything from gold coins to good Kentucky bourbon) meant there were numerous attempts to excavate it. For 150 years treasure seekers failed because the ship was about 100 feet from the river. Everyone who tried to dig was flooded out. In 1988, five families funded a professional excavation, using pumps to keep the site from flooding and the techniques developed during the Mary Rose excavation to preserve the finds. 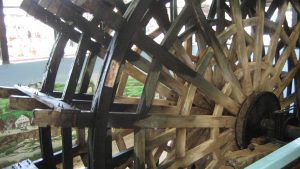 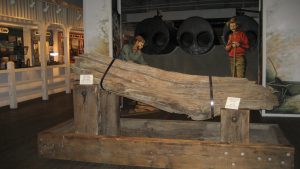 * Not that I have anything against little museums created with love and imagination on a tight budget. I’ve spend many happy hours in quirky storefront museums.
**  The Corps of Engineers identified 289 steamboat wrecks in the Missouri when they mapped the river in 1897.
*** In my case, that would be yes, yes, and yes.

A traveler’s tip for anyone inclined to come on board the Arabia:

We didn’t know until we got there, but the museum is located in a re-built warehouse near the river. City Market is home to a year-round farmer’s market on the weekends and year-round food-related tenants. If you have foodie inclinations, leave yourself time to shop and eat.