And speaking of the fur trade, as I believe we were, the Russian fur trade did not begin in Alaska and the Pacific Northwest of North America. At the same time that French and British (and to a lesser extent, Dutch, and Swedish) fur traders were exploring the virgin forests of North America in the late sixteenth and early seventeenth centuries, Russians were moving east toward the Siberian tundra in search of sable, also known as “soft gold,” the most expensive fur in the world. 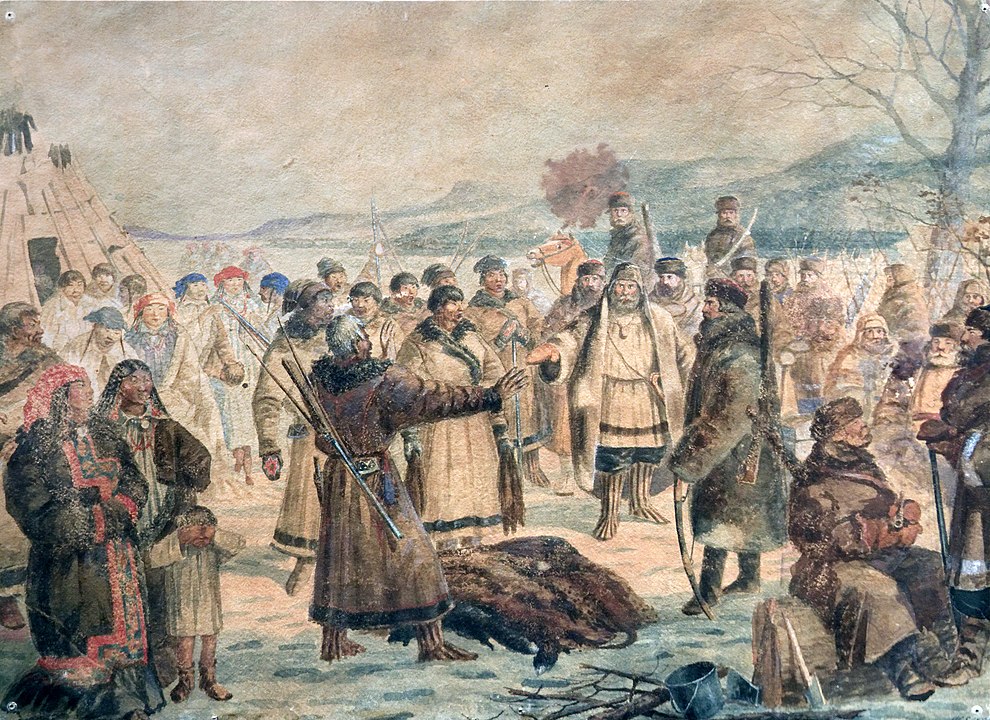 A 19th century print of Cossacks collecting the fur tribute in Siberia, with all the problematic attitudes one would expect

Traders, trappers and hunters were drawn to Siberia by a “fur fever”comparable to the 1849 California gold rush. By the very nature of their work, they became explorers and conquerors. Some worked on their own. Others were employed by the state or by wealthy merchant agents. The line between the two groups was blurry. Many Cossacks, working in the service of the Russian tsar, amassed fortunes for themselves by trading and trapping illegally. Independent traders and hunters frequently worked for the state at the request of local commanders.

Independent fur traders and state employees were equally eager to trap sable, the preferred fur of the Russian nobility and monarchy. A single hunting season could make a poor man rich.

Russians did not find an empty wilderness when they first arrived in Siberia in the 1580s. Conflict was inevitable. Russian traders were in Siberia to exploit the fur wealth to be found on the hunting and grazing lands of nomadic reindeer-herding peoples. Where Russians saw the fur-bearing animals only as a commodity, Siberian nomads combined the necessity of hunting with reverence for the animals they hunted. (Is any of this starting to sound familiar?) Over a period of eighty years, the Russians, armed with guns, imposed their rule on the indigenous populations and forced them to pay tribute in the form of furs.

The Russian conquest of Siberia was a world-changing event that almost no one noticed. The fur trade paid for Peter the Great’s transformation of Russia from a backwoods state with one foot in Asia to a great European power.

*My normal sources for translating a historical currency into today’s dollars failed me totally. I had assumed I would have to do a multi-step conversion from rubles to pounds, using seventeenth century values. Then from seventeenth century pounds to modern pounds, and hence to modern dollars. (A questionable process by any standard.) But none of my sources had a value for rubles prior to 1880. So let’s just agree that 300 rubles in 1650 would be worth quite a bit in today’s dollars and leave it at that.