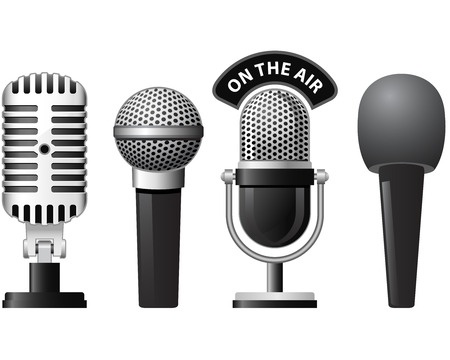 Recently, while reading a history of the German revolutions of 1918 and 1919,* I ran across this sentence about the events of November 10, 1918:

“With the meeting interrupted, the soldiers going wild in the lower rows and the workers in the upper rows engaged in bewildered discussions with each other, there was feverish negotiation in the aren—under the eyes of the agitated crowd, but not within their hearing, for microphones were not yet invented.”

Really? I thought. And off I went to find out more. **

It turns out that scientists have been trying to figure out ways to amplify sound for a long time. In fact, most of the sources I looked at on the history of the microphone started with Robert Hooke’s creation in 1665 of the acoustic cup and string “telephone” that most of us were introduced to in grade school.*** If the Oxford English dictionary is to be believed, the first recorded use of the word occurred 20 (okay, 19) years later, in 1684, as a description for something like an ear trumpet.

The “first” practical modern microphone was invented in 1876 by German-born inventor Emile Berliner, who was working in Thomas Edison’s workshop at the time. Known as a carbon-button microphone, it was drum-like device that enclosed two electric contacts separated by a thin layer of carbon. One contact was attached to a diaphragm that vibrated when struck by a sound wave; the other was connected to an output device. In other words, the carbon-button microphone converts sound into voltage, making it perfect for use in early telephone prototypes. In fact, Alexander Graham Bell bought the rights from Berliner for $50,000 for exactly that purpose.**** (For that matter, an improved version of the carbon button was still used in most telephones until the 1980s. )

People continued to tinker with ways to amplify sound, but the real impetus to developing microphones came with the advent of radio broadcasting and disc recording in the 1920s. They were not used to amplify a human voice in live performance until the 1930s.

And there you have it.

*It turns out that the initial revolution that gave birth to the Weimar Republic and the Spartacist uprising followed in January 1919 were only the high points (or low points depending on your point of view) of a following period of continuous street fighting and revolution that continued into April 1919.

** You call it easily distracted. I call it insatiable curiosity. (With a hat tip to Rudyard Kipling.)

***Having typed that sentence, I wondered if kids of the digital age were still introduced to concepts about sound using tin cans and string. A quick side diversion revealed many many current on-line lesson plans with titles like “How to make a simple string telephone” and “How does a string phone work?” Evidently some things don’t change.

****As is so often the case with groundbreaking inventions, the story is actually messier than this, with several less successful steps taken by earlier inventors, almost simultaneous invention of a similar device by David Edward Hughes in England (credited with applying the old word microphone to the new device), and a patent battle between Berliner and Edison. Edison got the patent.