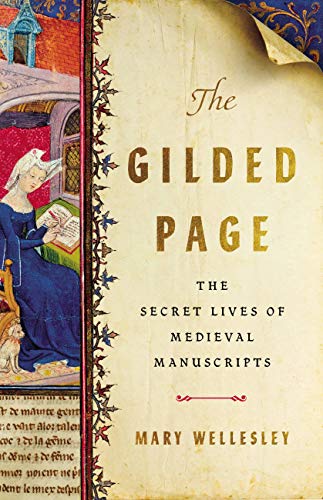 I finally finished reading Mary Wellesley’s The Gilded Page: The Secret Lives of Medieval Manuscripts, which I started reading in late September. The delay is a commentary on the chaos of my life over the last few months, not on the quality of the book, which is fascinating.

I’ve read a great deal about illuminated manuscripts over the years, in both medieval Europe and the Islamic world. As a result, I feel like I have a firm grasp on the physical production of manuscripts, or at least as firm a grasp as a non-specialist, non-artisan can have. (Believe me, no one wants a book that I have carefully copied by hand, or one that I have illustrated. These are not my skills.)

Wellesley approaches the question of medieval manuscripts from a different angle. Though she never loses track of the manuscripts she discusses as physical objects—what she describes as “tangible, smellable, visual encounters with the past”*—she focuses on them as collections of human stories. They give us clues about the people who commissioned them, the scribes who copied them, the artists who illustrated them, the authors who wrote them—and the people who interacted with, and sometimes altered, texts over time. (Her discussion of the use and abuse of Chaucer’s text, and his persona, was particularly interesting. ) She looks at the role of scribes outside monasteries and the growth of commercial publishing prior to the printed word. And she repeatedly challenges our assumptions about who created manuscripts.

I suspect it will not surprise any of you that I was particularly fascinated by the glimpses of women as patrons, artists and scribes of manuscripts that are a running theme throughout the book, and are the subject of the final chapter , titled “Authors Hidden”.  In fact, Wellesley uses the role of women in the production of texts in different ways to express one of her major points:

“Our imagination of the past is delineated by patriarchalism infused with prejudice. If we were wrong in imagining that all scribes were men, what else might we be wrong about? The past is, as ever, richer and more intriguing that we imagine.”

* It had never dawned on me that parchment manuscripts, like old books, and for that matter newly printed books, would have a distinctive smell. Bibliophilia engages all the senses.