Sigrid Schultz always described herself as a newspaperman. She worked in a largely male world, first as a foreign correspondents and later as a war correspondent in World War II. She was proud of her role as the first woman to be a foreign bureau chief for an American newspaper.

Schultz, and the small number of other women who worked as correspondents, weren’t the only women stepping into a new role in the years between the two world wars. Women had taken on new jobs during World War I, replacing men who had gone to the front. It wasn’t a new idea—women have always run farms and businesses when men go off to war. But the sheer scale of the war meant that the numbers of women involved was new. And so was the number of women who remained in the work force after the war, whether because of economic need resulting from war casualties or because they did not want to give up their new freedom. * (“How ya gonna keep them down on the farm after they’ve seen Paree?” applied to young women as well as to returning soldiers.)

[reminder: if you’re reading this in an email, you may need to click through to your browser to see, or in this case hear, the video.]

The “New Woman” doesn’t show up much in Sigrid Schultz’s letters, so whenever she mentions a woman who is not the wife of a fellow correspondent,** diplomat, or other player in Schultz’s world, I take the time to try to track her down. This week one of those searches led me to illustrator, fashion designer, business woman, and “influencer” Fanny Fern Fitzwater (1886-1966). 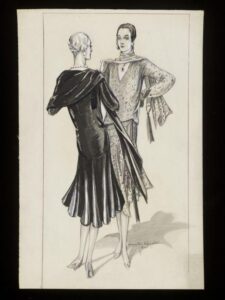 A Worth design illustrated by Fanny Fitzwater, late 1920s.

Fitwater appeared in a throw away line in one of Schultz’s letters. Schultz was constantly looking for a side gig. In 1927, she had the idea for a syndicated “strip”: an illustrated combination of fashion, travel, gossip and news. On a trip to Paris on newspaper business, she went looking for collaborators: “Grace Ziegler Brown to write the captions, Fanny Fitzwater draw the pictures and I provide the ideas.”

At the time, Fitzwater was a fashion reporter for the New York Herald Tribune who lived part-time in Paris, in order to report on French fashions. Unlike most other fashion reporters, she illustrated the designs she reported on. (She was a trained artist, who had studied at the Art Students League in New York and then spent several years in Paris working with French artists and fashion designers.) Her columns were soon syndicated nationwide. (Unlike Schult’z proposed strip, which went nowhere.)

After World War II, she taught fashion design and illustration at the Kansas City Art Institute for a time. In 1952, Elizabeth Arden offered her the job as head of Arden’s newly formed fashion department. At Elizabeth Arden, she managed the firm’s in-house designers and developed its clothing line until her death in 1966.

Fitzwater was a recognized fashion aauthority in her time, but is largely forgotten today.

Now if I could just find out something about Grace Ziegler Brown. Anyone have a clue?

*It should be pointed out that the idea of women working outside the home was new only in the middle and upper classes. Working class women had, by necessity, always worked. It is all too easy to filter women’s history through the lens of privilege.

**In fact, the wives of many of Sigrid’s colleagues were themselves journalists when they met their husbands and continued to work on a freelance basis after their marriages. If this is something you’re interested in, I discussed in my newsletter about a year ago. You can find it here.